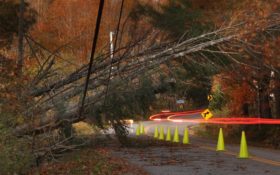 The storm left nearly 1.5 million homes and business across the region in the dark at the peak Monday. More than 800,000 customers remained without power Tuesday morning.

A house was swept away by raging waters in New Hampshire, sailboats crashed onto a beach in Massachusetts, an empty scaffolding truck was blown off a bridge and thousands of trees were toppled.

“Trees were falling all around me. I could hear them crashing down,” said John Carroll, spokesman for Central Maine Power, describing his commute to work on Monday. “It was terrifying. It was wild.”

By Tuesday, under sunny skies, the extent of the damage came into focus.

In Maine, the nation’s most heavily wooded state, fallen trees were tangled in power lines. Trees, limbs and leaves littered roads. Fences, vehicles and houses were smashed by falling trees and limbs.

Miraculously, no serious injuries were reported.

Central Maine Power expected 600 more line and tree workers from as far away as Illinois and Ohio on Wednesday to deal with the carnage. Service was already restored to all Maine hospitals and other critical customers, the utility said.

The storm packed winds gusting to 82 mph on Cape Cod, Massachusetts, 78 mph in New Hampshire, and 69 mph in Portland, Maine.

Some cities and towns in Maine, New Hampshire, Massachusetts and Connecticut postponed trick-or-treating from Halloween night — Tuesday — to as late as Sunday evening due to concerns about pitch-black streets, downed power lines and debris.

In Harpswell, Maine, Samantha Morrell dealt with a tearful 8-year-old after Halloween events were canceled in Harpswell and Topsham. Neighboring Brunswick also was discouraging trick-or-treating.

“She was hysterical,” Morrell said of her young zombie cheerleader. “She said, ‘They can’t cancel Halloween!’”

The storm caused more power outages in Maine than the infamous ice storm of 1998 that left some people in the dark for two weeks.

Roger Pomerleau remembers the 1998 well. He said the cold temperatures made that storm harder on a lot of people — but this storm is the one that knocked out his power, which remained out at midday Tuesday.

“The temperature is in our favor right now. Those were cold temperatures back then,” he said. “Freezing temperatures. Sump pumps weren’t working, cellars were filling up with water. Very different now.”

The weather this week is seasonable — high temperatures in the 50s and 60s and cooler overnight, though the low Wednesday morning was predicted to approach freezing.

In Warren, New Hampshire, dramatic video captured a one-story house being swept away by a raging river before crashing into a bridge and breaking apart. No one was in the house at the time.