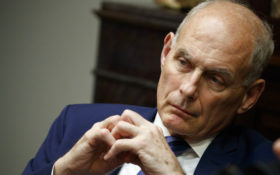 President Donald Trump is weighing at least four people to serve as his next chief of staff to succeed the departing John Kelly.

The high-profile hiring search comes at a pivotal time as the president looks to prepare his White House for the twin challenges of securing his re-election and fending off legal attacks once Democrats gain control of the House next year.

Trump’s top pick for the job, Nick Ayers, is out of the running and Trump is now soliciting input on at least four individuals, including Office of Management and Budget director Mick Mulvaney and Rep. Mark Meadows, R-N.C., the chair of the conservative House Freedom Caucus.

Ayers, who is chief of staff to Vice President Mike Pence, was reported as the favorite for the job when Trump announced Saturday that Kelly would leave around year’s end. But a White House official said Sunday that Trump and Ayers could not reach agreement on Ayers’ length of service and that he would instead assist the president from outside the administration. The officials spoke on condition of anonymity to discuss the sensitive personnel matters.

Ayers confirmed the decision in a tweet Sunday, thanking Trump and Pence for giving him the opportunity to work in the White House. “I will be departing at the end of the year but will work with the #MAGA team to advance the cause,” he said.

Trump offered his own take on the development: “I am in the process of interviewing some really great people for the position of White House Chief of Staff. Fake News has been saying with certainty it was Nick Ayers, a spectacular person who will always be with our #MAGA agenda. I will be making a decision soon!”

That leaves the next chief of staff down to one of four people.

Also among those thought to be in the mix were Treasury Secretary Steve Mnuchin and U.S. Trade Representative Robert Lighthizer, who said in a CBS interview that he hadn’t spoken to anyone at the White House about the job and remained “entirely focused” on his position.

Sponsored: Oncologists Protest After Officials Release True Cause of Cancer

In any administration, the role of White House chief of staff is split between the responsibilities of supervising the White House and managing the man sitting in the Oval Office. Striking that balance will be the defining challenge for whomever is selected next.

Trump wants his next chief of staff to hold the job through the 2020 election, the officials said. Ayers, who has young triplets, had long planned to leave the administration at the end of the year and had only agreed to serve in an interim basis through next spring.

Ayers had earned the backing of the president’s influential daughter and son-in-law, White House advisers Ivanka Trump and Jared Kushner, but was viewed warily by other aides.

Ayers will run a pro-Trump super PAC, according to a person familiar with his plans who was not authorized to discuss them by name.