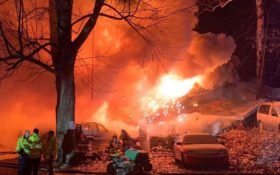 One body has been found inside the burned-out remains of a rural northern Indiana home where fire officials believe four children and two adults died in a fire early Wednesday.

The building’s roof collapsed after fire gutted most of the interior of the two-story, wood-frame house just outside Logansport, about 70 miles (115 kilometers) north of Indianapolis.

Cass County Sheriff Randy Pryor told reporters at the scene that the six people believed to be inside the house included four children ranging in age from infancy to 10 years old.

Two adults were rescued from the fire and were taken to a hospital, Crispen said.

State police Sgt. Tony Slocum said late Wednesday morning that one body had been found and crews were still searching the house for more. He said he didn’t know the age or gender of the person found.

Firefighting efforts were hindered by a lack of fire hydrants near the house. Fire crews ran out of the water they transported to the scene and had to wait for about five minutes for more tankers to arrive, Crispen said.

“It’s pretty numbing when the initial dispatch is telling us people are entrapped in the structure and they’re saying multiple people,” Crispen said. “It’s one of the toughest days I’ve probably had in my life.”

Three state fire investigators were at the scene to determine the cause of the blaze, State Fire Marshal James Greeson said, adding that the task ahead would not be easy.

“We have an excavation unit in there that is going to systematically pull this apart, so we can get in and actually do our investigation,” Greeson said.

Slocum said he didn’t want to speculate about the cause of the fire and that investigators were talking with the survivors.

“We’re going to consider it a criminal investigation until we find out otherwise — it is all encompassing,” Slocum said.