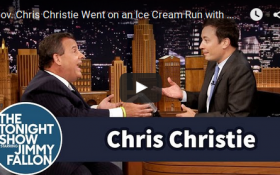 Once considered a frontrunner for the Republican Party presidential nomination, New Jersey Gov. Chris Christie has seen his poll numbers drop bigtime this summer. But the brash NJ governor wants back in the fight, so he is planning to take off the gloves in the next GOP debate.

Christie told his audience that if he starts feeling ignored – watch out!

According to the Associated Press, Christie is thinking of taking a more aggressive approach during the next Republican presidential primary debate to avoid being overshadowed.

During an appearance on “The Tonight Show Starring Jimmy Fallon” Monday night, the New Jersey governor and presidential candidate told Fallon that he’s considering going “nuclear” if he’s relegated to the sidelines during the next GOP face-off, which will be moderated by CNN later this month.

Christie’s return to late-night TV comes as he’s been struggling to gain momentum in the crowded Republican field in the summer polls. During the interview, Fallon, who often jokes about Christie during his monologue, pressed the famously brash governor, suggesting that he’s been overshadowed by billionaire businessman and Republican front-runner Donald Trump.

Christie had several notable clashes with his opponents during the Fox News debate and his performance was generally well-reviewed, but Trump nonetheless dominated coverage of the event.

The scramble for attention in the Republican presidential race will ensure the next GOP debate will be must-see TV.

You can check out the more from Christie’s appearance on “The Tonight Show” here: