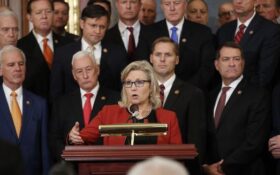 Thirty-five House Republicans joined Democrats in voting to create a commission to investigate the Jan. 6 attack on the Capitol, risking the wrath of former President Donald Trump and flouting GOP leaders who condemned the proposal as unfairly partisan and unneeded.

“I encourage all members, Republicans and Democrats alike, to put down their swords for once, just for once, and support this bill,” Katko said before the House approved the measure.

The 35 defectors represented a relatively modest but surprising slice of House Republicans, of whom 175 opposed the legislation. Their defiance underscored the party’s rift as some lawmakers supported an investigation of the Capitol riots while leaders tried to avoid enraging the former president, whose support they’ll need to win House control in the critical 2022 elections.

The 10 who backed impeachment included Katko and Rep. Liz Cheney, R-Wyo., Trump’s most prominent House GOP critic. She did not speak during Wednesday’s debate, but after the vote she tweeted a message urging the Senate to approve the commission, saying, “Some things must be above politics.”

The vote came a week after her colleagues dumped her from a Republican leadership position for repeatedly focusing on Trump — even after he left office — instead of advancing Republican causes.

A moderate and former prosecutor, Katko defended the proposed commission as a fair and needed step toward understanding the riot, how it happened, and what security improvements the Capitol needs to prevent a future assault.

“This is about fact. It is not partisan politics,” he claimed.

Many Republicans have downplayed the attack, with one comparing the rioters to tourists, and Trump has opposed the commission, calling it a “Democrat trap.”

House Minority Leader Kevin McCarthy did not speak during the debate on the bill.

Also voting for the commission were nine of the nearly two dozen Republicans whom Democrats consider prime targets to oust in next year’s elections. Their numbers included a pair of freshmen from South Florida and Katko, a fourth-term Syracuse-area lawmaker who has survived close races before.

The Democratic-run House approved the measure 252-175 and sent it to the Senate, where Democrats face a nearly impossible fight to garner at least 10 Republican “yes” votes they will need to prevail.

The measure would create a 10-member commission — with five members appointed by each party — to investigate the Capitol riot if it is signed into law.