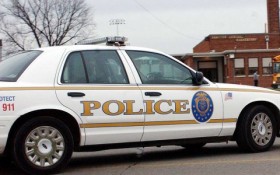 I guess he’ll never learn – Authorities say an 18-year-old man drove a stolen car to police headquarters to pick up court papers about a previous auto theft he was involved in — documents that were found in yet another stolen car.

Detectives contacted Butler, who arranged to pick them up. When he arrived at police headquarters, a detective arrested Butler and found keys to a Hyundai Sonata in his pocket. The car was located a block away.

It, too, had been reported stolen.

Butler was being held without bond. Jail records didn’t list an attorney.