30 probed for tweets suggesting that Erdogan died - The Horn News 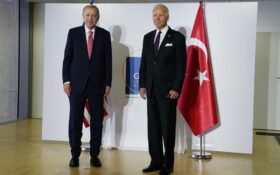 Turkish authorities have initiated legal proceedings against 30 people over a series of Twitter posts suggesting that Turkish President Recep Tayyip Erdogan had died, according to a police statement Wednesday.

The police statement said the 30 were being investigated for sharing posts using the hashtag “olmus” in Turkish — which roughly translates as “is said to be dead.”

They face legal proceedings for allegedly sharing “disinformation and manipulative content” as well as insulting Erdogan.

“Thirty individuals have been identified and the necessary legal proceedings have been initiated against them,” the police statement read.

The development comes amid increased speculation concerning the health of the 67-year-old president, who in a recent video looked unstable on his feet and had difficulty walking. During a holiday message in July, the president appeared unwell while his speech sounded slurred at times.

In a bid to dissipate rumors about Erdogan’s health, presidential aides on Wednesday posted videos on Twitter of him walking more robustly after a plane journey from Istanbul to Ankara.

Last month, the communications directorate similarly released a video showing Erdogan playing basketball to crush rumors that he may be ailing.

Opposition legislator Aykut Erdogdu tweeted: “I have spent my political life struggling against Erdogan. My only hope is that Erdogan is fit and healthy at the (next) elections and that he accounts to the people in ballot box.”