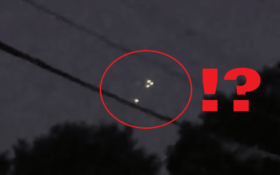 Hundreds of eyewitnesses were stunned over the weekend after mysterious lights suddenly appeared over the city of Cincinnati, Ohio this weekend — and vanished again after making bizarre patterns.

UFO's spotted near North of Cincinnati my son got 2 pics What's the name of the new UFO show on cable TV pic.twitter.com/23Hnw1F61M

Video of the incident shows between three and five lights appearing in the sky, moving slowly — sometimes into a triangular shape — and then vanishing.

Witnesses said the objects would seemingly appear and disappear at random.

There were numerous videos taken by astonished Ohio residents, from different angles. There has been no official explanation given by U.S. government officials for the strange objects.

Take a look for yourself here.