3 sure ways to WIN Thanksgiving (disarm liberals) - The Horn News 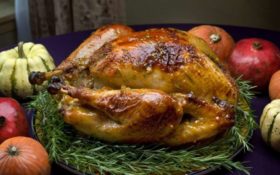 The big day is here… the guests are arriving… and the house is filled with the sounds of holiday cheer.

In too many homes, the warm greetings and hugs are quickly replaced by another sound – the sound of Americans going at it, arguing over politics.

It’s enough to give you indigestion before you even sit down to eat!

But you don’t have to let arguments interrupt your holiday meal, even if you’ve got some “looney left” cousins and nephews… or, let’s face it, even kids and grandkids… under one roof for the holiday meal.

With a little verbal karate, there’s three tricks you can use to disarm those family members aching for a fight before anything gets out of hand.

And then you can get on to what matters most this day: the delicious meal on the table.

These little tricks won’t change anyone’s mind; that’s not the point (most minds are already made up). The real goal is to get people to move on quickly and without someone’s face ending up in the pumpkin pie.

Here’s The Horn News guide to THREE BIG ISSUES and how to use them to your advantage around the holiday table:

Odds are, this single topic will be the Number One cause of disagreements and outright fights at the the dinner table today.

You can bet exactly NONE of those battles will end with one side of the table saying, “You know what, old chum? You’re right! I see the light now, and completely agree.”

So while you don’t have to back down from your principals and beliefs, for the sake of the holiday it might be best to punt.

Agree we all want the truth to come out and we’ll have to wait and see how it shakes out after everyone’s had their say.

When the economy is going well, everyone wins. And despite the dire predictions and warnings from the left-wing media and their favorite liberal economists, Trump has presided over massive and unrivaled economic growth.

The stock market just crossed 28,000 for the first time ever. Tax cuts have left people with more disposable income than ever.

And pretty much everyone who wants a job can find one right now.

Five states have hit all-time lows as the national unemployment rate dropped to 3.5 percent last month, the lowest in half a century. Even the liberal “resistance capital” of California is reaping the benefits of the Trump Boom: Unemployment in the state just reached a 40-year low!

But here’s another chance to find common ground – because leaving all that aside, we can agree that we’re hitting the holidays with fewer U.S. forces overseas fighting in other people’s wars.

That means it’s not just you and yours home for Thanksgiving. Many of the brave men and women who defend the nation are home with their families, too. And that’s always a good thing.

Maybe mention how great it is to live in a country where we can all express diverging views then have our say at the ballot box.

If all else falls… if you have a “true member” if the resistance in the room who won’t let go of the issues even for the sake of a holiday truce… it’s time to break out the old tried-and-true strategy.

Grab the remote and turn the game on!