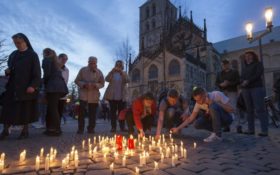 Three people remain in critical condition after the deadly van rampage in the western German city of Muenster, a hospital official said Monday.

A 48-year-old German killed two people and injured more than 20 others when he crashed into the crowd outside a popular bar on Saturday afternoon. He then fatally shot himself in the van.

Muenster’s University Hospital said it has been able to release two of the eight patients it admitted.

Sponsored: If you do this today, you could have brain cancer

“Three patients still have life-threatening injuries, so it’s uncertain how things will turn out,” Michael Raschke, the hospital’s deputy medical director, told reporters. But a fourth patient’s condition has improved, he added.

Hospital officials said the wounded had a variety of injuries, including to the head, pelvis and abdomen.

Investigators were still puzzling over what prompted the driver to plow into the crowd.

Police have said that an email he sent to a neighbor and others late last month contained “vague indications of suicidal thoughts, but no indications of a danger to other people.” They say there is no indication of any political motive or any accomplices.

Herbert Reul, the interior minister of North Rhine-Westphalia state where Muenster is located, said the man had no license for the gun with which he killed himself.

“It was not a properly acquired weapon,” he told WDR 5 radio.