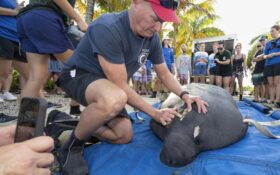 Three adult male manatees rescued from waters in the Florida Keys earlier this year have been returned to a Keys canal after being treated and rehabilitated at SeaWorld Orlando.

Personnel from the Florida Fish and Wildlife Conservation Commission, Dolphin Research Center, Florida Keys Aquarium Encounters and SeaWorld helped transition the trio on Tuesday from transport trucks to land and then into the water.

“Three animals in the same day … there’s nothing better,” Dolphin Research Center medical director Dr. Scott Gearhart said. “To take in an animal that needs your help and to see them released is fantastic … all three of them.”

Measuring up to 11 feet (3.3 meters) and weighing more than 1,000 pounds (450 kilograms) each, the manatees were rescued in April, June and July, respectively. Their medical conditions included a boat strike that caused a skull fracture, severe emaciation and gastric issues, dehydration and inflammation.

Marine mammal experts remind the public to be vigilant when boating in Florida waters.

“We share the waterways with these animals,” Gearhart said. “They’re very slow moving and they get into stuff, and you really need to be careful about what your activity is on the water.”