3 Dem officials stepping down amid extortion case - The Horn News 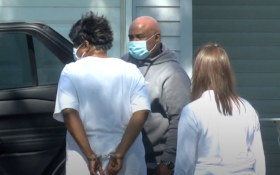 Three of the four Toledo City Council members accused of taking part in a bribery and extortion scheme have agreed to temporary suspensions, according to the state attorney general’s office.

Tyrone Riley, Yvonne Harper and Larry Sykes will continue to get their annual $27,500 council salaries, and their temporary replacements will be paid the same salary on a pro-rated basis. If the council members plead guilty or are convicted of the charges, the city could recover any funds paid to them during their suspensions.

Gary Johnson, the fourth council member charged in the case, has not yet agreed to voluntarily suspend his position, officials said Wednesday.

The council members, all Democrats, and a private attorney are accused of roles in the scheme, which federal prosecutors have said encouraged soliciting and/or accepting cash and other things of value from business owners in exchange for favorable votes on issues before the council.

All five have maintained thier innocence.