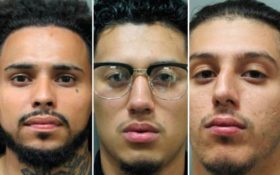 Two more men have been found guilty in the killings of two Maryland high school students on the eve of their graduation, bringing the number of convictions in the case to three.

In June 2017, 18-year-old Artem Ziberov and 17-year-old Shadi Najjar were lured to a residential neighborhood in Montgomery Village, where they believed they’d be selling an extra ticket to their graduation ceremony for Northwest High School.

Instead, they were shot to the death in their car, with more than 30 shell casings found at the scene.