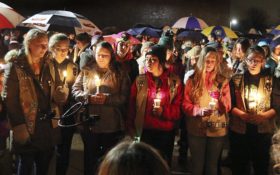 Investigators have yet to determine why a pickup truck veered across a highway in rural western Wisconsin and crashed into Girl Scouts collecting trash, killing three and critically injuring a parent.

No attorney who can speak for Treu was identified Sunday.

Authorities have not released the names and ages of any of the victims. The girls were fourth graders at Halmstad Elementary School and Southview Elementary School in nearby Chippewa Falls, about 90 miles (145 kilometers) east of Minneapolis.

Hundreds of community members huddled under umbrellas in the biting rain Sunday evening for a candlelight vigil outside Halmstad Elementary. Girl Scouts sang songs in memory of the victims, who were members of Troop 3055. A makeshift memorial of teddy bears, balloons and candles was set up on two wooden benches.

“Our hearts are broken for the girls and families of the Girl Scouts of the Northwestern Great Lakes,” CEO Sylvia Acevedo of Girl Scouts of the USA said in a statement Sunday. “The Girl Scout Movement everywhere stands with our sister Girl Scouts in Wisconsin to grieve and comfort one another in the wake of this terrible tragedy.”

In a message to parents, Superintendent Heidi Eliopoulos said: “This is a difficult time for our students, families and staff. We will be providing ongoing support for both students (and) families and staff for as long as needed.”

Sokup said Treu’s black Ford F-150 crossed a lane Saturday morning and veered into a roadside ditch, striking the victims. Other members of the troop were picking up trash from the opposite shoulder.

Sokup said it wasn’t immediately clear what led Treu, of Chippewa Falls, to leave the road, and he described the crash site as “not an unsafe area.” The Star Tribune reported that the crash happened before a hill and that there are no blind spots.

But Cecily Spallees, a personal care attendant at a nearby group home, told the newspaper that drivers regularly speed along that stretch of road, which quickly changes from a 55-mph to a 35-mph zone.

“I’m always telling one of my residents that he shouldn’t walk this strip at night,” Spallees said. “It’s not safe.”