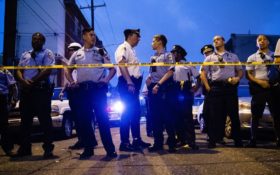 In the wake of George Floyd’s tragic death at the hands of a white police officer, liberals have issued a sweeping call to defund the police.

But conservative writer Joe Cunningham at RedState is arguing that defunding law enforcement is the last thing America should do.

Instead, he offered up a 3-pronged conservative solution aimed at reducing police brutality.

The answer lies at the “roots of conservatism.”

Cunningham writes that a large part of police militarization is because of the amount of spending that goes into law enforcement.

Rather than a full scale defunding, a strategic budget could prevent the police from being able to easily command and control citizens at the drop of a hat.

The sheer volume of laws grants the government an insurmountable amount of power, which at times can lead to abuse of force from the police. The “bad cops” are afforded protection in the power pyramid and often protected by union legislation within the police force as well.

Instead of unions, Cunningham offered the possibility of compensation programs for both victims wrongly mistreated and police officers wrongly accused, suspended, or fired for police brutality.

This of course is a pillar straight out of the conservative handbook.

In Minneapolis, the City Council is fighting to “defund and dismantle” the Twin City’s police force and local officials intend to replace it with a “transformative new model of public safety.” While that sounds great on paper, it’s just another opportunity for governing bodies to wield power over American citizens.

It’s a veiled attempt to “increase the size and scope of government” functions.

What Democrat-controlled cities need is less — not more — government.

4. Bonus: Initiatives to arm the vulnerable citizens of America

There’s one last way police brutality can be solved that Cunningham didn’t mention. And it has to do with the freedom of American citizens most at risk of police brutality.

In communities where tensions run high between citizens and law enforcement, Americans should be encouraged to bear arms in pursuit of protection for themselves and their community.

Conservative activist Maj Toure spreads a similar message with his Black Guns Matter nonprofit foundation, and in the past he’s called out Democrats for imposing control on gun ownership, particularly when it comes to black Americans in Democratically-controlled cities.