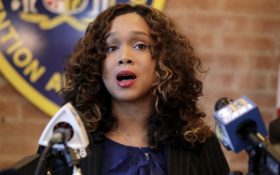 More than two dozen correctional officers in Baltimore were charged Tuesday with using excessive force on prisoners at state-operated jails in a city plagued by decades of institutional corruption, inside and outside jailhouse walls.

Maryland corrections secretary Robert Green said all the indicted officers have been on administrative leave since 2018, when the state Department of Public Safety and Correctional Services began investigating the allegations.

Indicted officers used social media to publicly promote their “reputation and successes,” and they furtively used winks, nods and other body language to warn each other about the presence of supervisors and other ‘non-members,’” the indictment says.

Gov. Larry Hogan said in a statement that his administration has no tolerance for corruption in the state’s correctional system.

“Our correctional officers have one of the most difficult jobs in all of public safety, and we will not let the criminal behavior of the few tarnish the great work of the nearly 5,000 dedicated officers who serve with distinction every single day,” he said.

Hogan, a Republican, said the department’s anti-corruption efforts have led to the arrests and convictions of more than 200 officers, inmates and “citizen accomplices.”

In 2015, Maryland closed the men’s section of a state-run Baltimore jail that was notorious for its decrepit conditions, criminal activity and corruption. In 2013, a federal indictment exposed a sophisticated smuggling ring operating inside the Baltimore City Detention Center, involving dozens of gang members and correctional officers. The investigation also revealed that a jailhouse gang leader had impregnated four female guards.

Corruption has infected many corners of Baltimore’s city government.

Most recently, disgraced former mayor Catherine Pugh pleaded guilty to federal charges stemming from sales of her self-published children’s books. Another former mayor, Sheila Dixon, left office in 2010 as part of a plea deal for misappropriating about $500 in gift cards meant for needy families.

The city’s corruption-riddled police department remains under a federal consent decree following the April 2015 death of a young black man, Freddie Gray, while in police custody. The department also has been rocked by a string of indictments and guilty pleas by task force officers accused of extortion, robbery, falsifying evidence and reselling seized drugs.

Mosby said 21 of the 25 indicted officers were taken into custody Tuesday. All were members of a tactical unit with a paramilitary command structure operating inside four detention facilities in Baltimore and Anne Arundel County, Maryland.

The indicted officers face a combined total 236 counts, including charges of assault and participating in a criminal gang, Mosby said.

Mosby said the officers used violence and intimidation to “maintain its dominance and its operational territory” inside the jails.

“All 25 of these correctional officers have allegedly abused their power and abused our trust,” she added.

The indictment includes alleged offenses against 25 prisoners and incidents that occurred as far back as 2016, authorities said.

“This case represents our strong effort to root out people who don’t belong in the field where public safety and rehabilitation is the mission,” Green, the corrections secretary, told reporters. “This is a disturbing case, but it does not represent nor should it cast a shadow on the commitment and integrity of the exceptional correctional professionals in this department.”