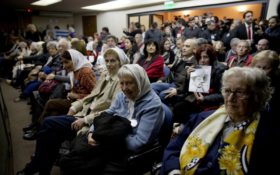 A court in Italy sentenced 24 people to life in prison for their involvement in human rights crimes committed during the “Operation Condor” offensive by South American governments to hunt down dissidents within the region and beyond, the Uruguayan government said Monday.

It wasn’t immediately clear what the sentences would mean since all but one of the defendants was tried in absentia. However, Uruguay has imprisoned people convicted earlier in similar cases, although it does not allow life sentences.

South American dictators in Chile, Argentina, Bolivia, Brazil, Paraguay and Uruguay set up Operation Condor in the 1970s as a coordinated effort to track down their opponents across borders and eliminate them.

An appeals court in Rome ruled Monday against members of the military, police and others who once formed part of the former dictatorships of Bolivia, Paraguay and Uruguay. Some of the victims who were forcibly disappeared were Italian citizens.

The case was initiated 20 years ago by families of the victims.

The earlier ruling absolved several members of the dictatorships because the statute of limitations on the crimes had expired.

The sentences delivered Monday were confirmed by Uruguayan Foreign Minister Rodolfo Nin Novoa. He said former naval officer Jorge Néstor Troccoli was the only one of the convicted who lives in Italy and he was present during the case. Troccoli is an Italian citizen who fled from Uruguay in 2007.