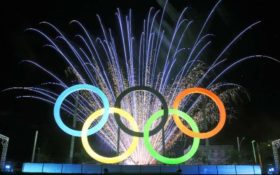 The countdown clock for the postponed Tokyo Olympics hit 200 days to go on Monday.

Also on Monday, Japanese Prime Minister Yoshihide Suga said he would consider calling a state of emergency as new coronavirus cases surge to record numbers in Tokyo and neighboring prefectures. Japan has never had a lockdown for COVID-19, attempting to juggle the economy and health risks.

It’s nearing deadline time for Tokyo Olympic organizers, the International Olympic Committee, and various Japanese government entities as they try to pull off the Games in the middle of a pandemic.

Officials have promised to announce concrete plans early in the new year about how to get 15,000 Olympic and Paralympic athletes into Japan; about the safety of the Athletes Village, and hundreds of thousands of fans, media, judges, officials, broadcasters and VIPs.

The new year is here.

Suga pledged again to hold the Olympics, saying it would be “proof that people have overcome the coronavirus.” And he said vaccine approval would be speeded up by a month so that vaccinations could begin in February instead of March.

Japan has attributed more than 3,400 deaths to COVID-19, modest by global standards for a country of 125 million, but worrying as new cases rise quickly. A poll last month by national broadcaster NHK show 63% want the Olympics postponed or canceled.

Tokyo Gov. Yuriko Koike and the governors of Saitama, Chiba and Kanagawa prefectures asked the national government Saturday to declare the state of emergency after the capital saw a daily record of 1,337 new cases on New Year’s Eve. That marked a jump of almost 400 in just a few days.

Yoshiro Mori, the president of the organizing committee and a former prime minister, again ruled out any cancellation of the games in an interview several days ago with the Nikkan Sports newspaper. He was asked when a decision would come about having local fans or fans from abroad.

“Sometime from March through May,” he replied. “The final deadline for a decision would be May, but it may come sooner.”

Any reduction in fans will hit the organizing committee budget. Tokyo has budgeted $800 million for ticket sales, and any shortfall will have to be made up by government entities, which are footing most of the Olympic bills.

The official budget for the Tokyo Olympics was increased last month to $15.4 billion, an increase of $2.8 billion because of the delay. However, several government audits the last few years suggest the real number is about $25 billion.

All but $6.7 billion is public money.

Mori indicated the opening ceremony, scheduled for July 23, could be troublesome with thousands of athletes and officials gathering to parade around the stadium. He also suggested the ceremony couldn’t be shortened, since television broadcasters had paid for the lucrative time. He said some officials might be cut out of the parade.

Television determines much of the Olympic scheduling, and selling broadcast rights accounts for 73% of the IOC’s income. Another 18% is from large sponsors such as Coca-Cola and Toyota.

The torch relay, which begins on March 25, will also face crowding with 10,000 runners expected across almost four months. Coca-Cola and Toyota are the prime sponsors.