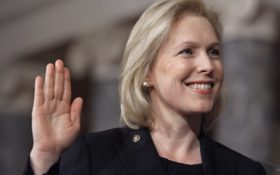 In what has to be a first for an American presidential candidate, one Democrat seeking high office has now openly vowed NOT to enforce one of the nation’s most basic laws.

Sen. Kirsten Gillibrand (D-N.Y.) said that if anyone is caught entering the country illegally under her watch, she’ll simply let them in.

“As president of the United States, I wouldn’t use the detention system at all,” she said on ”Face the Nation” on CBS last week. “They don’t need to be incarcerated. If they’re given a lawyer and given a process, they will follow it. They can go into the community in the way we used to handle these cases under the Department of Justice.”

The Center for Immigration Studies said 43 percent of illegal aliens found and given court dates instead of incarceration failed to show up for those appearances in 2017.

Since 1997, 37 percent skipped their court appearances, many presumably now de facto residents of the United States, working illegally and often sending the money back home.

Tucker Carlson reported this week that immigrant workers send $150 billion back to their countries every year, with nearly 20 percent of that amount – $28 billion per year – from illegal aliens, according to a new study from the Federation for American Immigration Reform.

“That’s $28 billion leaving this country, going abroad every year from people who don’t even have the legal right to work here in the first place,” Carlson noted.

Yet Gillibrand and nearly all other Democrats would allow MORE of this. Gillibrand even volunteered her home state – but, notably, not her actual home – to host them, saying New Yorkers “would be delighted” to take them in.

She said her immigration plan would instead “actually fund the border security measures that are anti-terrorism, anti-human trafficking, anti-drug trafficking and anti-gun trafficking.”

But many of those who enter illegally are bought here via human trafficking… and while the left doesn’t like to admit it, certainly at least some of the “bad hombres” who enter the country to sell drugs, join gangs and commit crimes do so through the same system that admits refugees.

If they are all simply allowed in, with no screening, detention or incarceration, the criminal element is almost guaranteed to be among those who skip their court dates and are never seen by the system again (until they’re arrested, and – in many cases – simply released again).

Immigration has always been a hot-button political issue. But once upon a time, the basics had overall widespread bipartisan agreement, starting with the need to enforce the laws that ensure everyone who enters the country does so legally.

“We simply cannot allow people to pour into the United States undetected, undocumented, unchecked, and circumventing the line of people who are waiting patiently, diligently and lawfully to become immigrants into this country,” Barack Obama said in 2005.

“We do need to address the issue of immigration and the challenge we have of undocumented people in our country,” House Speaker Nancy Pelosi (D-Calif.) said in 2008. “We certainly do not want any more coming in.”

And nearly EVERY Democrat has supported border walls in the past without apology.

“I voted numerous times when I was a senator to spend money to build a barrier to try to prevent illegal immigrants from coming in,” Hillary Clinton bragged in 2015. “I do think that you have to control your borders.”

Even the Washington Post… not exactly friendly territory for conservatives… admits that hundreds of miles of new border fencing went up a decade ago in large part because Democrats backed it “most vocally.”

And after it was put in place, “illegal border crossings declined.”

Now, we have a president willing to step up and act – but because he’s a Republican… and, specifically, because he’s Trump… they will oppose him at all costs, even if it means selling out their own principles in the process.