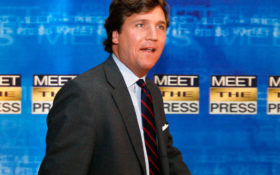 But did Carlson cast his ballot in the November 2020 election for Trump’s opponent?

Politico is reporting that the bold Fox News show host voted for music and fashion mogul Kanye West, not TRump.

But is it true?

According to the report, anonymous insiders close to Carlson say he confided in them that he voted for West.

Unnamed sources in the Politico report say that the friendship between he, a longtime media member who used to appear on CNN, and West, the celebrity tycoon linked to the Kardashian family, is very real.

But more specifics on Carlson’s voting record from the past election cycle sheds more light on whether or not there may be any truth to the rumors.

According to Politico, Carlson is a registered Republican voter in the state of Florida, in Lee County where he lives part-time. Records indicated that he voted in person in 2020.

West, however, wasn’t able to qualify for the ballot in Florida.

But Carlson would have had to write-in West’s name on the ballot.

Politico tracked down a county official in Lee County who claimed that there were just 8 total write-ins in the vote count for the 2020 election.

And a separate official, Tammy Lipa, said she remembered that there were write-ins for West.

It’s unlikely anyone will ever know if Carson was actually one of those votes.

Throughout the years, mainstream media personalities have speculated about Carlson and who he truly supports off camera.

He recently told Business Insider in an interview that he “never” votes, and though he’s been known to echo the talking points of former President Trump, claimed he didn’t cast a vote for him in 2016.

On the flip side, Carlson has gone out of his way to praise West during segments of his primetime show.

He once called West one of the most important voices on abortion rights, saying, “on foundational questions about life and children and what happens when you die, no one with a national platform has been more honest or sincere or effective than Kanye West has been.”

So there’s evidence enough that we know what Carlson thinks of West.

Do you think Tucker Carlson really voted for Kanye West?