Top 2020 Democrat's campaign OVER after this video - The Horn News 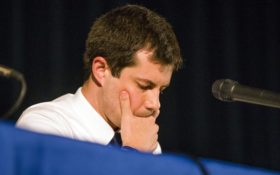 Mayor Pete Buttigieg, D-I.N., was torched over the weekend — and video of an emotional town hall could spell the end of his 2020 presidential campaign.

What’s worse — the political heat came from within his own back yard.

Residents of South Bend erupted in anger after a police officer involved shooting fatally took the life of an African-American man. Residents blamed Buttigieg for ignoring their community

Buttigieg was jeered, booed and criticized as he tried to restore his disgraced image in South Bend.

And the video could undo his entire campaign —

Mayor Pete Buttigieg: “I do not have evidence that there has been discipline for racist behavior…”

Protester: “You running for president and you expect black people to vote for you?”

Buttigieg: “I’m not asking for your vote.”

Protester: “You ain’t gonna get it either.” pic.twitter.com/tK1Ys0Yvfc

“It’s time for you to do something,” the mother of the deceased said. “If you can’t do it, step your a** down!”

“I’m tired of hearing your lies,” she said before walking away.

Buttigieg then scheduled a town hall with disgruntled city residents — a move that backfired so badly it left the 37-year-old at a loss for words.

“I don’t know if it’s smart or not,” he said with a smile when asked by reporters why he even held the town hall.

The town hall grew hostile when some community members questioned whether the Democratic mayor had done enough for African-Americans in his city.

Mayor Pete’s facial expression clearly showed that he was upset. The pressure was getting to him.

Buttigieg had surged from obscurity to become a top-tier candidate in a crowded Democratic presidential field.

But he has struggled to connect with minority voters — a critical voting bloc he needs if he expects to win the party’s presidential nomination.