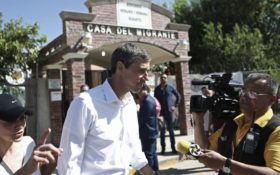 Democratic presidential candidate Beto O’Rourke isn’t getting the support he wants from American voters — so he’s resorting to drastic measures to buoy his failing bid to be the next president.

He took his presidential campaign to Mexico to ask for illegal immigrant votes.

Last week at the Democratic debates, he tried speaking to voters below the border when he answered a question in Spanish — seemingly out of nowhere.

A week later, O’Rourke took his actual presidential campaign to Mexico, a foreign country where the citizens can’t legally vote in American elections.

The stunt is likely part of a larger campaign strategy to flip the state of Texas blue in the 2020 presidential campaign, should he garner the Democratic nomination.

But O’Rourke has a lot of work to do if he wants the nomination. The latest Quinnipiac poll out of Texas shows him getting trounced by former Vice President Joe Biden — in his home state!

O’Rourke also previously traveled to a center holding illegal immigrant children in Houston and was one of many Democratic presidential candidates to visit one in Homestead, Florida, near the Miami debate site.

A frequent visitor to Juarez before he began running for president in March, O’Rourke was there in December to meet with immigrants staying in shelters as they waited to begin being processed for U.S. asylum.