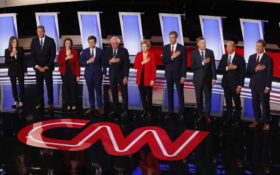 Democrat Tim Ryan said Wednesday he didn’t put his hand over his heart when the national anthem was played at the presidential debate because of “absent-mindedness,” not as a sign of protest.

The Ohio congressman was the only one of the 10 candidates at the Detroit debate not to place a hand over their heart during “The Star-Spangled Banner” Tuesday night.

Ryan stood with his hands clasped in front.

Critics called Ryan out on social media, saying he was disrespectful and questioning whether it was a protest similar to former NFL player Colin Kaepernick’s kneeling during the anthem.

Ryan’s campaign said in a statement he wasn’t protesting and “didn’t mean to make any statement.”

The campaign called it “a moment of absent-mindedness while on a debate stage that won’t happen again.”

“Congressman Ryan loves our country and will continue to honor the flag during the anthem in future events, as he has in countless events in the past,” the campaign said.