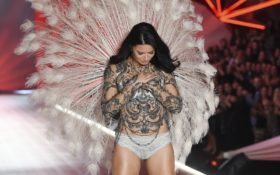 The 2019 Victoria Secret fashion show is no more.

And it may be gone forever thanks, in part, to liberal outrage.

The staple lingerie brand is discontinuing its yearly spectacle, which featured female supermodels strutting down the catwalk on television.

In deciding to pull the plug, the brand will “evolve the messaging of the company,” according to a statement by L Brands, owner of the company.

The fashion show’s dismal 2018 ratings didn’t help the cause of a brand already on life support, and mounting pressure from liberals caused the company to finally shutter the event.

Ed Razek, the former chief marketing officer, caused controversy last year when he told Vogue.com in an interview that he wouldn’t allow both plus-sized and transgender models in the fashion show.

There’s “no room” for men and overweight women to be Victoria Secret models, he said.

That caused one of their biggest Victoria angels, Karlie Kloss, to abandon the show over her feminist beliefs.

And if that wasn’t enough… then came the bombshell when Leslie Wexner, the CEO of L Brands, was outed for having close ties with pedophile Jeffrey Epstein.

They were close friends, according to numerous sources at the time, which also wrote that Epstein used Wexner’s position to recruit women, promising them modeling jobs in exchange for being a part of his sex cult.

So it’s clear that the powerhouse brand has gone through some turbulent times.

But in the end, along with everything else considered, Victoria Secret just wasn’t making enough money.

Chief Financial Officer Stuart Burgdoefer put it best: “Did we see specific material impact in terms of a short-term sales response to the airing of the fashion show? As a general matter, the answer to that question is no.”

So the 2019 Victoria Secret Fashion show is canned, and it’s unlikely to ever come back.