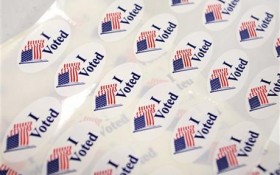 Election Day 2015 is Tuesday, which means we’re a year away from the big Election Day to come – the one with the next president on the ballot. Here’s a look at some of the milestones ahead before the end of the 2016 presidential campaign.

A DEBATE OVER DEBATES

Nov. 10: The next Republican debate, in Milwaukee, is expected to proceed as planned, with Fox News and The Wall Street Journal as sponsors.

Nov. 14: The next Democratic debate, a Saturday night in Iowa.

Dec. 15: Republicans are scheduled to debate in Nevada, though questions hang over the proceedings now that the campaigns are pressing for changes in how the primary series is conducted.

Dec. 19: Another Saturday debate for the Democrats, in New Hampshire.

Jan. 17: The Democratic debaters are up again, this time with the Congressional Black Caucus as one of the sponsors, in South Carolina. Two more Democratic matchups are expected in February and March.

Jan. 31: A big day for money in politics. For the first time since July, super PACs report on how much money they’ve raised and the names of donors. These candidate-aligned groups can raise and spend unlimited money, outside the control of candidates and have become key to success in a presidential race. This date is also when the campaigns next report on their fundraising, showing who’s got the cash to put up a sustained fight on the eve of voting.

Feb. 1: The storied Iowa caucuses. Iowans meet to choose their favorite for the Republican and Democratic nominations, the first votes that count in the presidential contest after several years of positioning by the hopefuls and a months-long blizzard of opinion polls.

Feb. 9: The storied New Hampshire primary. After this, the intimate flavor of politicking in small states will give way to big rallies and advertising blitzes.

Feb. 20: The Republican South Carolina primary – first primary in the South as well as the first in a state with a large non-white population – and the Nevada Democratic caucuses.

Feb. 26: A planned Republican primary debate in Texas. This date is in jeopardy because the Republican Party suspended cooperation with NBC, a sponsor, after the flap over the October debate on CNBC. Questions hang, too, over sponsors, rules and schedule for five other GOP debates planned from January through March.

March 1: There’s no clump in U.S. politics like Super Tuesday, when contests are held in 13 states. Among the big ones for both parties: Colorado, Texas and Virginia. Until this point, the race is largely one of expectations and bounce. Super Tuesday, though, offers a huge cache of delegates needed for the nomination. It’s typically when the numbers really start to count.

March 15: Another big night for winning delegates and scoring in battleground states, with primaries in Illinois, Ohio, North Carolina, Missouri and Florida. The Florida primary, a big deal in its own right, takes on added significance because Floridians Marco Rubio, the senator, and Jeb Bush, the ex-governor, are running.

May 29: How many Republican rivals will be still be standing by the end of May? This is the date in 2012 when Mitt Romney clinched the Republican nomination – the Texas primary pushed him over the edge.

June 3: Will the Democratic race drag out this long? Barack Obama secured the nomination over Hillary Rodham Clinton on this date in 2008, thanks to the final primaries, in Montana (which he won) and South Dakota (which he lost), as well as a heaping helping of support from party establishment figures known as superdelegates.

July 25-28: Ditto for the Democrats, in Philadelphia.

Sept. 5: Labor Day is the traditional (informal) kickoff of a presidential campaign that actually has been going on for months. Really it’s the start of the final stretch.

Sept. 26: The first of three head to head debates of the Democratic and Republican nominees, in Ohio.

Soon after: Who pops up in Iowa to stake a claim for the 2020 race? Last time, it was Marco Rubio, sowing seeds for 2016 less than two weeks after the 2012 campaign was done.