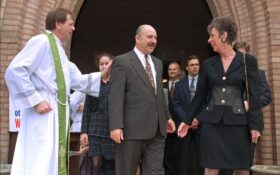 Marsanne Golsby, who was Foster’s press secretary when he was governor, said that Foster died Sunday at his home in Franklin, surrounded by relatives.

“Our family and I are saddened to announce that after 90 remarkable years my dear husband has passed. Our family will miss him dearly.” his wife, Alice Foster, said in a statement.

Foster had entered hospice care recently, with Golsby saying he had a variety of age-related illnesses. Family members will announce funeral details later.

Foster was a political late-bloomer, first elected to the state Senate from south Louisiana’s St. Mary Parish as a Democrat at age 57 in 1987.

Eight years later he switched to the Republican Party before launching a longshot bid to succeed retiring Gov. Edwin Edwards, a Democrat who had dominated state politics for most of three decades.

Their styles could not have been more different. Edwards, silver haired, silver tongued and always nattily attired had been elected governor four times despite a penchant for scandal that eventually led to his imprisonment on federal corruption charges.

The bald and burly Foster was Edwards’ equal in neither style nor oratory. Still, he proved more adept at politics than many would have thought. Perhaps it was in his blood: His grandfather, Murphy James Foster, had been governor in the late 19th century. But Foster said he launched his political career not because he wanted to be a politician but because he was angry: The incumbent state senator at the time wouldn’t return his phone calls.

He challenged the incumbent and won handily.

Among his causes: overhauling a workers compensation system that many said was a drag on business recruitment and changing rules governing lawsuits that conservative lobbyists complained were weighted too heavily against businesses.

“If you know how to run a business and you have the knack to hire the right people, you can run the nation, much less the state,” he said in an interview shortly after his first gubernatorial victory.

Foster and 15 others were on that 1995 ballot to succeed Edwards. Former Gov. Buddy Roemer, a Republican, was an early favorite and there were other heavyweights including then-state Treasurer Mary Landrieu (later a U.S. senator) and then-Congressman Cleo Fields, both Democrats.

Foster’s advertising included small newspaper ads and television commercials that portrayed him as a common man, one showing him in a welder’s mask.

He and Fields, who would have been the state’s first Black governor since Reconstruction, wound up in a runoff, which Foster won. He was easily re-elected four years later and served until January 2004.

His tenure was largely scandal-free. However, he became the first sitting governor fined by the state ethics board — $20,000 for failing to disclose his 1995 campaign purchase of mailing lists from Ku Klux Klan leader David Duke.

He broke with some conservatives, however, when he supported legislation and a constitutional amendment eliminating some sales taxes and replacing them with higher income taxes.

Foster is credited with significant reduction in state debt during his tenure. He also refused to take his salary until he was able to raise teacher salaries to the Southern average — a target he never met.

His most enduring legacy may be in education. He supported a public school accountability program tying school rankings to student performance and allowing the state to take over failing schools. It laid the groundwork for the state’s seizing control of most New Orleans public schools after catastrophic flooding that followed Hurricane Katrina in 2005.

He also was an enthusiastic backer of a community college system to offer academic training and work skills to those who don’t seek a four-year degree. It passed the Legislature in the spring of 1998 and was approved by voters later that year.