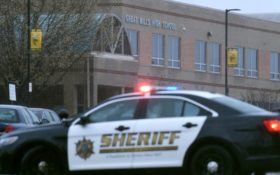 A teenager with a handgun shot two classmates inside his Maryland high school Tuesday before he was fatally wounded during a confrontation with a school resource officer, a sheriff said.

An armed good guy at the school saved the day and prevented any innocent deaths — which means this story will be largely ignored by the mainstream media.

The officer and the student both fired a single shot, St. Mary’s County Sheriff Tim Cameron said. The other students — a 16-year-old girl and a 14-year-old boy — were hospitalized. The officer, who doubles as a SWAT team member, was unharmed.

“When the shooting took place, our school resource officer, who was stationed inside the school, was alerted to the event and the shots being fired. He pursued the shooter and engaged the shooter, during which that engagement he fired a round at the shooter,” Cameron said.

“Simultaneously the shooter fired a round as well. So, in the hours to come, in the days to come, through a detailed investigation, we will be able to determine if our SRO’s round struck the shooter.”

The shooter was identified as Austin Rollins, 17. His motive wasn’t immediately clear. “There is an indication that a prior relationship existed between the shooter and the female victim, the sheriff said.

Agents with the FBI and the Bureau of Alcohol, Tobacco, Firearms and Explosives joined deputies at Great Mills High School as students endured a lengthy lockdown, cowering inside classrooms and a locker room while officers worked to make sure there were no more threats on campus.

“They came in with guns, and they probably thought there might be another shooter, of course,” she said. “About an hour or two later they came — more police came — and told us they would search us and search our bags and stuff.” Eventually, the students were escorted outside.

The school has about 1,600 students and is near the Patuxent River Naval Air Station, about 65 miles southeast of Washington. On Tuesday, ambulances, fire trucks and other emergency vehicles crowded the parking lot and the street outside, where about 20 school buses lined up in the rain to take students to nearby Leonardtown High School to be picked up by their parent or guardians.

Politicians acknowledged that this shooting adds pressure to take action against gun violence, joining a nationwide groundswell of anger over the Valentine’s Day killings of 17 people at a Florida high school by a teenager with an assault weapon.

Democratic Rep. Steny Hoyer praised the first responders, saying the officer at the school “answered the call this morning with swiftness, professionalism, and courage.” He said it’s now for Congress to take action.

“We sympathize. We empathize. We have moments of silence. But we don’t have action,” Hoyer said. “Wringing our hands is not enough.”

Republican Gov. Larry Hogan, meanwhile, accused the Democrat-led legislature of failing to take action on “one of the most aggressive school safety plans in the country.”

“We’ve got to take action,” Hogan said. “We’re going to try to get something done in Annapolis.”