2 die after freak accident at U.S. Air Force base - The Horn News 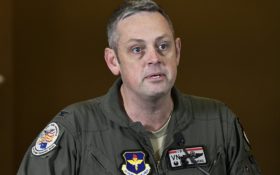 Two airmen were killed Thursday in an accident involving two jets during the landing phase of a training exercise at a U.S. Air Force base in northwestern Oklahoma, a military official said.

The crash occurred shortly after 9 a.m. at Vance Air Force Base in Enid, about 65 miles (105 kilometers) northwest of Oklahoma City. Two airmen aboard one of the T-38 Talons were killed, Col. Corey Simmons, commander of the 71st Flying Training Wing, said during a news conference Thursday afternoon.

He said the two airmen on the other T-38 Talon were not hurt.

Simmons struggled to control his emotions as he described as much as he could of what happened and how the approximately 1,200 military personnel on the base were coping with the tragedy.

“We are a close-knit family,” Simmons said, appearing to choke back tears, “and when tragedies like this occur, every member of the U.S. military, Vance, Enid, feels it.”

The military will not release the names of the service members who died until 24 hours after their families have been notified, Simmons said, citing military protocol.

An Air Force safety board that functions in a similar way to the National Transportation Safety Board is investigating, and it typically takes 30-60 days to determine the cause of such accidents, Simmons said.

He declined to speculate on what might have happened.

“Only … for the purity of the safety investigation, I don’t want to try to guess. I wasn’t out there when it happened,” Simmons said.

Simmons also said he does not know if the planes collided.

“I know that there are two airplanes that are off the runway right now at Vance Air Force Base,” he said. “How they got to that point, I’ve got to let the investigation play itself out.”

TV footage from the scene shows one aircraft upside down on grass near a runway and the second aircraft upright on the tarmac.

The base describes the T-38 Talon on its website as “a twin-engine, high altitude, supersonic jet trainer.” used in a variety of jet pilot training roles. It is one of three types of aircraft, along with the T-1 Jayhawk and the T-6 Texan, used for pilot training at the base.

The crash is the second incident involving a T-38 training jet in Oklahoma in the past 15 months.

Air Force officials said an Air Force pilot ejected successfully before a jet trainer crashed in western Oklahoma in August 2018 and was found safe, while the jet crashed and exploded about 70 miles (110 kilometers) west of the base. Investigators said the pilot ejected after the jet developed engine trouble after apparently striking a bird.

Simmons said the 2018 crash was the first major accident at the base since 2000. He said there are typically 800-1,000 landings per day at the base as part of about 225 daily training missions.

Simmons said all flights at the base are shut down and that planes would likely remain grounded on Friday.