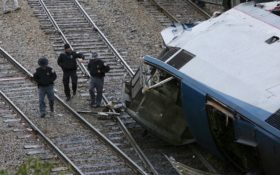 Passengers aboard the Amtrak train that slammed into a freight train before dawn Sunday described being jolted from slumber as seats ripped away, awakening to screams and crying.

“It was shaking, then it started jumping,” said passenger Eric Larkin, speaking with The Associated Press about the train’s final moments. He said he was suddenly awakened as he felt the train suddenly leave the tracks as it hit a curve. His seat then broke loose, slamming him into the row of seats in front of him.

It was in the panic that followed, Larkin said, that he heard screams and crying all around him as passengers sought to leave the crumpled train. Other passengers were bleeding, he said, and his right knee throbbed from where it banged into the seats in front of him.

Walking with a limp, hours later, the Pamlico County, North Carolina, resident said he was dazed and didn’t even know where he was when the train finally came to a complete stop.

Soon after he got off the train, Larkin said arriving police officers told him to stop taking cellphone photos of the wreckage and not to share any of the images he had already captured.

“I thought it was a little strange,” Larkin said of the request. Eventually he was shuttled to a middle school with other passengers.

“It’s a blessing to be alive,” said Larkin. “I thought that I was dead.”

It was the third deadly wreck involving Amtrak in less than two months. The Silver Star was en route from New York to Miami with nearly 150 people aboard when it struck the empty CSX train around 2:45 a.m. Sunday, authorities said.

The crash happened near a switchyard south of Columbia where railcars hauling automobiles are loaded and unloaded.

Many of the passengers were asleep.

Andre Neblett, who previously played with the NFL’s Carolina Panthers, told the AP his 43-year-old mother Tronia Dorsey was onboard. He said she described massive jolts.

“It was chaos,” Neblett said, describing what his mother told him as he left an American Red Cross shelter where his mother’s purple suitcase had been sent. “It’s unbelievable.”

In the third rail car, a seat had fallen onto Dorsey’s legs, her son said. He added that she described “a lot of screaming” and babies crying in the dark rail compartment.

“She said she was just waiting on somebody to get to her,” Neblett said, noting she was to have been picked up by a family member in Denmark, a community in South Carolina.

He drove in from Charlotte, North Carolina, to retrieve her belongings and added his mother was safely resting later with family after being checked out at a hospital.

“Minor scratches and bruises but really just traumatized by the whole experience,” he said. ” … Thank God she was safe.”

Some passengers called their loved ones in the minutes afterward.

The State newspaper reports Ryan Roberts couldn’t believe it when his wife Alexandria Delgado awoke him with a call early Sunday to their Raleigh, North Carolina, home. He said he asked her to repeat herself three times when she said her train had derailed.

He had left his wife and another female friend off at the Raleigh train station Saturday night so they could take a trip to Florida. Roberts said he and the husband of the other woman drove for hours to reach Columbia, not knowing the condition of their loved ones.

Both women were banged up and still being treated later Sunday at a hospital and “in a lot of pain,” according to Roberts.

“They were sleeping and woke up to a nightmare,” Roberts told the paper. “They were horrified.”