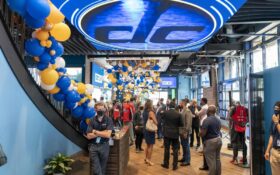 The first full-service sportsbook at a major sports arena or stadium in the United States opened its doors Wednesday at the home of the NBA’s Washington Wizards and NHL’s Capitals.

Capital One Arena is directly accessible from the William Hill sportsbook during Wizards playoff games without fans needing to leave the building. That possibility exists when the Capitals return to the ice this fall if the NHL adjusts its policies.

The New Jersey Devils opened a betting “lounge” inside Prudential Center in Newark in October 2018, but it’s only able to show odds with bettors able to place wagers on a mobile application. State restrictions there limit in-person wagers to casinos or racetracks.

“This is the first integrated sports book in a physical stadium in the country, so this is the new paradigm,” Reeg said. “This is where (sports betting is) going.”

Ted Leonsis, who owns the Capitals, Wizards and the arena, hopes to capitalize on the increasing acceptance of legalized sports betting in the U.S. and continue chipping away at the stigma of gambling.

“Fans come to the arena and they now have the ability to have a rooting interest, if you will, in the outcome of the game,” Leonsis said. “I just view this as a natural extension of what was happening but to do it in a more modern — in the sunlight, in a transparent — way.”

Leonsis is betting it’ll be the first of many around the country.

“You’ll see lots of other arenas, lots of other leagues pushing on the gas to do this,” he said. “Because of that, we know we’re an exemplar and everyone’s going to be watching how well we execute.”

The first opportunity for fans to go from an arena to a sportsbook comes Saturday when the Wizards face the Philadelphia 76ers in Game 3 of their first-round playoff series.