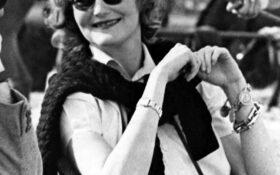 The city manager in Newport, Rhode Island, is standing by the city police department’s review of the 1966 death of an employee of wealthy heiress Doris Duke that found — like the original investigation — it was all an accident.

Police opened the review into the death of Eduardo Tirella in July after a witness who had never before talked to police came forward after reading the book “Homicide at Rough Point,” by Peter Lance. The author and journalist who grew up in Newport suggested Duke, who died in 1993, acted with intent when she struck Tirella with a car at her mansion.

That witness, Bob Walker, 68, was a 13-year-old paperboy at the time who was first upon the scene, and his account differed from official versions of what happened.

But while Detective Jacque Wuest, who conducted the review, found Walker to be “credible,” she concluded in a statement last week: “There is no new evidence that would change the previous conclusion in this matter, nor is there any new evidence that warrants further review.”

The statement Tuesday from the office of City Manager Joseph Nicholson Jr. stood by the police, saying “at this time we cannot ascribe any definitive motive or intent to Ms. Duke.”

“To that end, it would be imprudent to either reclassify this incident or to offer any further commentary beyond our official opinion. Accordingly, as we have previously articulated, it remains the opinion of the Newport Police Department that there is not sufficient evidence to draw any firm conclusions as to the motivations of Ms. Duke,” the statement said.

Lance, in a telephone interview Tuesday, called the findings of the police review “absurd.”

In a statement, he said that as the author of several books critical of the FBI on counterterrorism and organized crime, “I have never seen such an abdication by a law enforcement agency of its responsibility to tell the truth about a known criminal act.”

Duke inherited her money from her father, James Duke, president of the American Tobacco Co. and co-founder of the company known today as Duke Energy. Duke University in North Carolina is named for her family.

Tirella had worked as a designer for Duke for several years. On the day of the death, the pair were taking the car to look at an artifact, according to Lance’s book. But Duke was furious at Tirella for telling her that he was leaving to become a set designer in Hollywood, Lance said in the book.

Police conducted a brief interview with Duke several days after Tirella’s death at which point investigators took her at her word that it was an accident.

Duke had a huge amount of clout in the city in 1966, and apparently still does, Lance said.

“What it means, effectively, is that Doris Duke, who died in 1993 at the age of 80, still wields a huge influence over the current City of Newport administration,” he said.