One local observer described the scene as a “war zone.” But this was not a war. He was simply talking about the 180 bodies that piled up inside the restroom.

In total, 242 people died. It was one of the deadliest nightclub fires in history.

In January 2013, around 2,000 people gathered in the Brazilian nightclub Kiss. According to the local police, the fire started when a member of the performing band ignited a pyrotechnic device on stage. Thanks to the flammable acoustic foam in the ceiling, the fire quickly spread everywhere.

The crowd panicked. But the front door was the only access in and out of the building. Imagine 2,000 people running for the exit… one single exit.

Not everyone made it.

Why am I telling you this sad story?

Of course, it’s impossible to compare a loss of life with a loss of money… But I’m telling you this story because something similar happens with “exits” during market collapses.

Panic takes over. Investors run for the exit. But not everyone gets out on time. In the market, these “run for the exits” events often end in disaster for unprepared investors.

Is there a way to spot these violent vertical crashes?

Well, let’s take a closer look at the 1929 and 1987 crashes: I recently came across an interesting article that tried to answer that question.

The author is John Hussman, founder of Hussman Strategic Advisors Inc. In the article, he points out that typically those vertical moves or crashes follow a similar pattern.

“At present, the market is displaying the same set of characteristics as it did just prior to past market crashes. In both 1929 and 1987, the market crash began about 55 trading sessions after the peak. During those sessions, the market traced out a characteristic pattern of declining peaks and troughs, with a one-day rally just after the third trough (roughly 14% down from the peak), and then ‘five days of Armageddon.’

Here’s the three charts he shared with his readers… 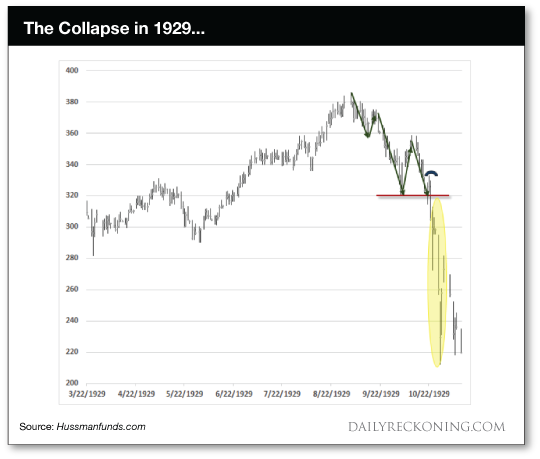 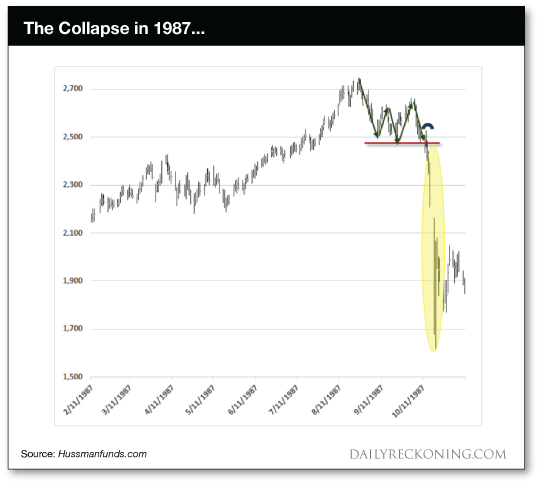 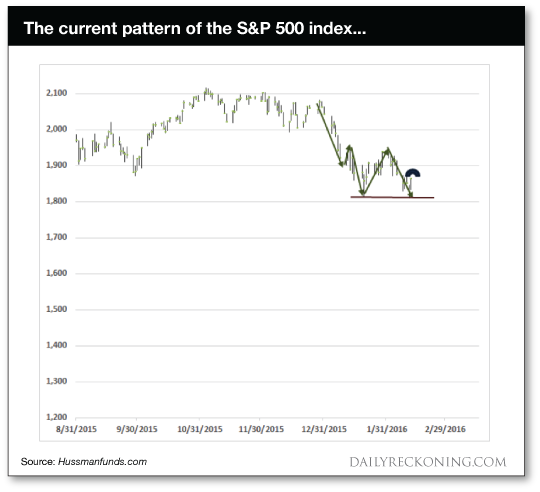 According to him, the line in the sand is 1,800 in the S&P 500 Index. If the market drops below that level, he says we could have a collapse.

Could he be right?

And if he’s right, everyone will not get out in time. In fact, most people would be caught by surprise.

What can you do? How can you protect your wealth and even make money if this type of an event were to happen?

As far as I know, there’s only one strategy that’s designed to capture those unexpected, fast moves.

Yes, you guessed it… I’m talking about trend following.

See, these quick collapses don’t happen in a vacuum. Normally they happen when the market is already in a downtrend.

So those following the trend normally are already positioned in the right direction for the unpredictable collapse.

The same thing happened in 2008. Stocks initially moved down slowly in the first half of 2008.

Then October 2008 came and the vertical down move I am talking about hit, and hit hard.

When the collapse came, trend followers were already positioned on the right side of the trend.

“For markets to move in tandem, there has to be a common perception or consensus about economic conditions that drives it. When a major event occurs in the middle of such a consensus, such as the Russian debt default of August 1998, the terrorist attacks of September 11, 2001, or the corporate accounting scandals of 2002 [and the 2008 equity market crash], it will often accelerate existing trends already in place…events do not happen in a vacuum… This is the reason trend following rarely gets caught on the wrong side of an event.”

And anyone who says they know for sure, well, they are having problems with the truth.

But if you simply follow the trend (which remains down according to my system), you’ll be well prepared for a possible collapse.

I want to end with the wise words of Ed Seykota, a legendary trend following trader and one of my mentors. He once said:

“A surprise is an event that catches someone unaware. If you are already on the trend, the surprises seem to happen to the other guys.”

Wise words from the smartest man I’ve ever met.

for The Daily Reckoning

P.S. If your stocks fell 50%, you’d have to make 100% gains just to break even. Imagine holding a stock for 10 or 20 years and not making any money. That’s insane. Yet a lot of people follow this useless strategy.

If you are following the trend, there’s no need to worry. Trend followers make money in both up and down markets. Don’t waste years of your time just scrambling to break even. Following the trend is the way out of that trap.

Click here now to find out how to protect and grow your money in any market, up or down.