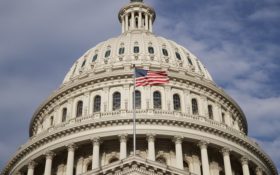 Political life is supposed to mean a lifetime of “public service”—but for a shocking number of members of Congress, it means leveraging secret information learned during investigations to line your pockets and those of your family, according to a new report.

The number of congressmen potentially caught up in dirty dealing is scandalous and stunning.

Over the last two full years, 2019 to 2021, about one-third of all senators and members of the House of Representatives engaged in a stock transaction or said their family members engaged in one. That’s 183 out of 535 members of Congress—or one out of three—and “more than half of them sat on congressional committees that potentially gave them insight into the companies whose shares they reported buying or selling, ”according to an investigation from The New York Times.

The corruption gets worse as stock trades get more common, the Times found. When it comes to the top stock swappers in Congress, 88 percent have potential conflicts of interest.

“44 of the 50 members of Congress who were most active in the markets bought or sold securities in companies over which their committee assignments could give them some degree of knowledge or influence,” said the Times.

To make things worse, the newspaper’s investigation only scratches the surface on a mountain of back-scratching and dirty deals.

For instance, we know Speaker of the House Nancy Pelosi, D-Calif., has seen her net worth nearly triple in 18 years: Her household wealth surged from $41 million in 2004 to $115 million in 2019, according to the campaign finance watchdog Open Sources.

“Much of their added wealth is due to extremely lucrative and ‘lucky’ decisions about when to buy and sell stocks and options in the very industries and companies over which Pelosi, as House Speaker, exercises enormous and direct influence,” reports journalist Glenn Greenwald, a progressive who regularly appears on Fox News because he believes in holding his own side accountable. “Close to 75% of the Pelosis’ stock trading over the last two years has been in Big Tech: more than $33 million worth of trading. That has happened as major legislation is pending before the House, controlled by the Committees Pelosi oversees, which could radically reshape the industry.”

But technically, Pelosi controls committees—she doesn’t sit on them, so The New York Times report doesn’t include the potential double-dealing engaged in by Pelosi and her husband.

It seems the newspaper may have way undercounted the number of irregularities—possibly by as much as half. At least 72 members of Congress—of both parties—violated the “Stop Trading on Congressional Knowledge” act (or STOCK Act) of 2012, a separate investigation from Business Insider found. That law says members of Congress must promptly report all stock trades made by themselves, family members, or legal dependents…but instead, they swept their business deals under the rug and blamed their accountants or managers for not filling out the reports on time.

A look at even this small list shows how entrenched the problem is in Washington: The cast includes the former head of the Democratic National Committee (Wasserman Schultz), a crusader leading the charge on the January 6th Committee (Raskin), and a senator accused of senility and caught up in an espionage scandal involving her driver (Feinstein).

This is all dangerous, because a congressman who deals on inside information may have two different outcomes in mind when new legislation comes before his or her committee: One decision is good for the country, the other is good for his family’s fortune.

How many have sold us out to line their own pockets? We may never know, but a few courageous leaders have had enough and said this has to stop.

In July, Senator Josh Hawley, R-Mo., sent a letter to Gary Peters “calling for a hearing to consider bipartisan proposals to ban insider stock trading by members of Congress and their spouses.”

“More than 70% of Americans agree that this is unacceptable and that Congress shouldn’t be trading stocks at all,” said Hawley, a possible 2024 presidential candidate in the unlikely event that Donald Trump does not seek a second term.

Another proposal, the “TRUST in Congress” act introduced by Rep. Chip Roy, R-Texas, would at least require congressmen and their families to put all stock trades in a blind trust, where they won’t directly know what they own, let alone how to benefit from it in Congress.

One thing is for certain: Something has to be done to stop Congress from working for themselves instead of the American people.

“After all, clean government in Washington begins with Members of Congress putting the American people first—and not lining their own pockets,” said Hawley.