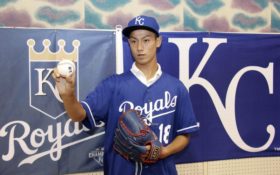 Kaito Yuki is headed to the Kansas City Royals organization instead of attending high school in Japan.

The team signed Yuki, a 16-year-old pitcher, out of junior high to a minor league contract Sunday. He is thought to be the first Japanese junior high school player to sign with a major league club.

“I wanted to play in the United States as soon as possible, rather than playing high school ball at Koshien Stadium (in Japan’s iconic national championship),” Yuki said in statement issued by the Royals.

“My goal is to do well in the majors. Not everybody is given that chance, so I want to do my best,” he said at a news conference in his hometown of Osaka.

Yuki has been studying English before his move to the United States. The Royals are optimistic that after paperwork is completed, he will arrive in August at the team’s spring training complex in Surprise, Arizona, to begin familiarizing himself with the local culture and language.

He would participate in the Royals’ fall instructional league in September and October, with the objective of making his professional debut in the minors next year.

“The first thing is for him to be patient and build up his body, and then if he stays on course, in five years get an invite to major league spring training,” said Hiroyuki Oya, a Royals international scout.

Yuki has been compared to Chicago Cubs pitcher Yu Darvish, who grew up in the same city.

“I’m anxious, but I am more excited now,” Yuki said at his news conference in Japan.

He garnered the attention of scouts last year while representing Japan in a youth tournament in the United States.

“We are excited to add Kaito Yuki to our organization,” said Rene Francisco, Royals vice president and assistant general manager of major league and international operations. “We are very much looking forward to seeing him get started in professional baseball next year. I’d like to thank and congratulate our Pacific Rim coordinator Phil Dale and our scout in Japan, Hiro Oya, for the tremendous work in identifying and signing this young man.”

Yuki is also believed to be the youngest player from Japan to sign with a big league team.

“He’s not even in high school,” Francisco said. “He and his family chose to sign with Kansas City instead of going the normal route Japanese players take. It’s pretty amazing what this kid is doing. Credit to Phil and Hiro.”

Aoki, acquired in a trade with the Milwaukee Brewers, was the most recent. He was a starter on the 2014 team that won the American League pennant and lost to the San Francisco Giants in the World Series.