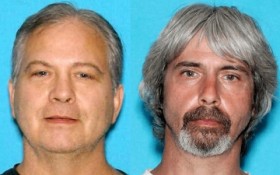 Authorities say they now believe a couple missing from Arlington, Washington has been killed. They are asking for the public’s help in tracking two suspects, John and Patrick Reed.

Detectives in Snohomish County have tied the brothers to the disposal of the missing couple’s two vehicles.

The search for Patrick Shunn and his wife, Monique Patenaude, began after their vehicles were found in a wooded area of Oso on Thursday.

Snohomish County Sheriff Ty Trenary says the two families lived nearby and were involved in some kind of property dispute.

He says anyone who has seen either of the Reed brothers should call 911 and not approach them. They are considered armed and dangerous.

Authorities found a vehicle that belongs to John Reed in Ellensburg on Saturday but the suspects’ current location is unknown.