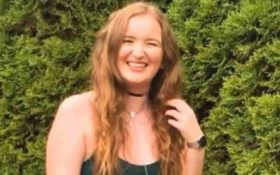 About 150 people have joined the search for a young British woman who is missing on a Cambodian island popular with travelers, a senior police officer said Monday.

Maj. Gen. Chuon Narin, police chief of coastal Preah Sihanouk province, said divers, police, navy personnel, local volunteers and foreigners are taking part in the search for 21-year-old Amelia Bambridge. She has not been seen since last Wednesday night, when she attended a beach party on Koh Rong island in southwestern Cambodia joined by tourists of various nationalities.

Her bag with phone, money and credit cards was found the next morning on a nearby beach, and after she failed to check out of the hostel where she had been staying, her passport was found in her room.

Chuon Narin expressed guarded optimism that Bambridge might be found alive, saying that several foreign tourists have been previously found safe after going missing in a jungle area. He said he wasn’t aware of any cases of foreigners being murdered.

“As of now, the searchers have no news about her whereabouts and they have expanded the area they are searching to make sure all possible sites are checked,” Chuon Narin said. “I can’t say whether Bambridge was killed or got lost in the island’s jungle.”

Preah Sihanouk province’s governor, Kouch Chamroeun, said on his Facebook page that the investigation was being carried out by three teams: the searchers on land and sea, others checking hotels and guest houses on the island, and experts carrying out a criminal investigation.

A local official, Koh Rong commune chief Chhoeun Chantha, told The Associated Press he suspected Bambridge may have drowned because the authorities found her belongings on a rock close the water’s edge near the party site.

Bambridge’s brother Harry and father Phil are on the island to help in the search, and her mother was en route, Britain’s Press Association reported.

The news agency said the father told British broadcaster Sky News he feared his daughter had been abducted.

He said he believed she had been “taken,” telling Sky News: “I don’t think she’s had an accident. If she’d had an accident she would have been found by now.”

The family learned of her disappearance when she failed to check out from her hostel.

Koh Rong, about 25 kilometers (15 miles) offshore in the Gulf of Thailand, covers an area of about 78 square kilometers (30 square miles).

Bambridge’s sister, Georgie, told Sky News that Amelia “literally wanted to go traveling her whole life. … She has spent the past two years saving for it and spent the last year reading blogs of travelers, researching what she was going to do.”

Her family said her trip to Asia began on Sept. 27, when she flew to Vietnam.

Georgie said her sister “would never drink to excess” and was “always in control,” adding, “She would always be looking out for me, it’s not like her to not look after herself.”