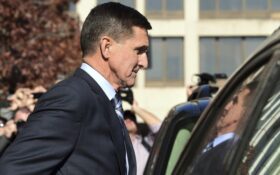 The group, led by Ohio Attorney General Dave Yost, argues that U.S. District Judge Emmet Sullivan should immediately grant the Justice Department’s motion to dismiss all charges against Flynn because “the federal judiciary has no authority to make the executive branch pursue (or continue to pursue) a criminal conviction,” the filing says.

The attorney generals also argue that Sullivan should drop the case without commentary “because such punditry disrobes the judiciary of its cloak of impartiality,” according to the filing.

Flynn pleaded guilty in special counsel Robert Mueller’s Russia investigation to lying to the FBI about conversations with the then-Russian ambassador to the United States during the presidential transition period.

The Justice Department filed a motion earlier this month to dismiss the Flynn case, saying that the FBI had insufficient basis to question Flynn in the first place and that statements he made during the interview were not material to the broader counterintelligence investigation into ties between Russia and the Trump campaign.

Sullivan has signaled resistance to swiftly accepting the Justice Department’s motion and appointed a retired jurist last week to act as a friend of the court and evaluate whether Flynn should be held in criminal contempt. The former judge, John Gleeson, has asked to file his first brief in June.

“There was no reason to issue these orders because this Court has no say in the federal government’s decision not to prosecute,” the state attorneys general argue. “Simply put, the decision not to pursue a criminal conviction is vested in the executive branch alone — and neither the legislature nor the judiciary has any role in the executive’s making of that decision.”