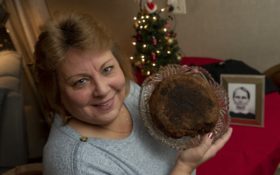 Some families pass down jewelry, watches or even recipes. But a Michigan family has its own heirloom: a 141-year-old fruitcake.

“It’s a great thing,” said Julie Ruttinger, the great great granddaughter of Fidelia Ford, who baked the cake in 1878. “It was tradition. It’s a legacy.”

The cake was initially preserved to honor Ford. She established a tradition of baking the cake and letting it age for a year before serving it during holiday seasons. Ford died at age 65 before her 1878 cake could be eaten, and by the time the holidays arrived, the family considered her handiwork a legacy, not food.

Until his 2013 death, the cake was in the care of Ruttinger’s father, Morgan Ford, who was Fidelia Ford’s great-grandson. He had stored it in an antique glass dish on the top shelf of a china cabinet in his Tecumseh home — which is where it remains today.

“He took care of it to the day he left the earth,” Ruttinger said. “We knew it meant a lot to him.”

Guinness World Records doesn’t have an entry for the oldest fruitcake, but as for cakes in general, the Ford fruitcake is nowhere near the world’s oldest, The Detroit News reported. That honor goes to a 4,176-year-old cake that was found in an Egyptian tomb, according to the Guinness organization. It is on display in a food museum in Switzerland.

During the 93 years that Morgan Ford held on to his family’s fruitcake, he showed it off at church and family gatherings and shared stories about its history with younger relatives. He even showcased the cake on “The Tonight Show” in December 2003, taking a bite with the host and saying it tasted like thrashed wheat.

“He really enjoyed sharing the joy of the cake,” said another of his daughters, Sue Durkee. “He took a lot of pride in it.”