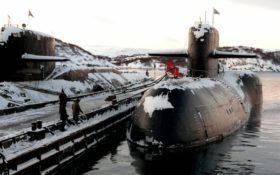 A fire has erupted on one of the Russian navy’s deep-sea submersibles, killing 14 sailors, the Russian Defense Ministry said Tuesday.

The ministry said that the blaze broke out Monday while the vessel was performing tests in Russia’s territorial waters. It added that the fire was extinguished thanks to the crew’s self-sacrifice, and the submersible is now at the Arctic port of Severomorsk, the main base of Russia’s Northern Fleet.

The ministry didn’t say how many crewmembers were on board when the fire erupted and if there were any survivors. It didn’t give a cause for the fire or provide any additional information about the incident, saying that an official investigation is underway.

The ministry’s statement said the submersible is intended for studying the seabed, but didn’t give its name or type.

The Russian navy uses Priz-class and Bester-class deep water vehicles, which have a hull built of titanium and are capable of operating at a depth of 1,000 meters (3,281 feet). They are transported to the area of operation by a carrier vessel and can operate autonomously for up to 120 hours.

The blaze marks the deadliest Russian naval incident since 2008, when 20 died when a firefighting system was accidentally initiated while the Nerpa nuclear-powered submarine of Russia’s Pacific Fleet was undergoing trials.

In the deadliest naval incident in post-Soviet Russia, the Kursk nuclear submarine exploded and sank on Aug. 12, 2000, during naval maneuvers in the Barents Sea, killing all 118 crewmembers.