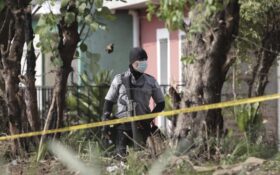 Fourteen bodies have now been found at the home of a former police officer who was arrested this month for murdering two women, Salvadoran prosecutors said Thursday.

Authorities have said the case revealed the existence of a murder ring that may have operated for a decade, and there has been speculation in local media that it could have killed as many as 20 people.

The former officer, Hugo Osorio Chávez, was detained and charged earlier this month in the killing of a 57-year-old woman and her 26-year-old daughter. Osorio Chávez, 51, who had previously been investigated for sex crimes, confessed to killing the two.

After his arrest, a search was launched of his home in the eastern town of Chalchuapa.

The search turned up eight pits that held 14 bodies, some of which may have been buried as long as two years ago, prosecutors said. The total of bodies recovered at the home increased by four over the past week.

Justice Minister Gustavo Villatoro said the skeletal remains will be re-assembled and subjected to DNA testing to determine their identities. He said the depth of the pits where the remains were found suggests more than one person was involved in burying them.

Based on the information in the case, prosecutors have issued arrest warrants for 10 other suspects who may have acted as accomplices in 14 killings, including the murders of nine women.

The prosecutors’ office said earlier the victims may include girls aged 9, 7 and 2.

The country’s director of police, Mauricio Arriaza Chicas, said Osorio Chávez was fired from the force in 2005 and may have been killing people for a decade.

“He told us that he found victims on social media and sought them out, luring them with the American dream,” Arriaza Chicas said.

“This psychopath has been detained and I believe that 99% of the people who assisted him have been detained,” said.