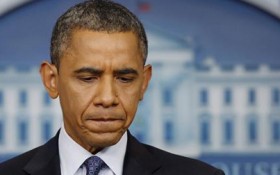 U.S. officials have announced today that President Barack Obama’s administration will formally acknowledge that ISIS is committing genocide against Christians in Iraq and Syria.

But critics are outraged that the administration is set to use a legal loophole to avoid having to help stop the slaughter.

And it’s all because Obama is reluctant to open a Pandora’s Box that would force him to recognize the massacre of Christians all around the world.

“The administration is unwilling to acknowledge either the scope of the menace we face or to confront the ideology that drives it,” because it is concerned that, “the press may begin to ‘connect the dots’. Genocide is also being committed in Libya, Egypt, Yemen, Nigeria, Pakistan and other countries,” said Robert Destro, director of the Interdisciplinary Program in Law & Religion at the Columbus School of Law of The Catholic University of America.

The point is underscored when critics of the administration have pointed out that 17 people, including four nuns, had been murdered at an elder care center in Aden, Yemen by ISIS just one week ago.

“Notice that the U.S. government localizes the killing and refuses to acknowledge the common ideology and close ties among the killers. Until we understand that the killings of Christians in Libya, Syria, Egypt and, or Nigeria are driven by the same ideology that targets Shia Muslims, Yazidis and others in Iraq, we will never see the ‘big picture’,” Prof. Destro said.

Declaring genocide raises hard questions about U.S. policy across the region and in multiple nations that Obama seems unwilling — or unable — to confront only nine months before he plans to push away from the table in Washington.

The officials say Secretary of State John Kerry will declare the slaughter of Christians a genocide on Thursday, just making a congressional deadline set by the U.S. House of Representatives on Monday, when Congress took forceful action to certify that genocide has taken place in Iraq and Syria.

House Resolution 75, co-sponsored by Rep. Jeff Fortenberry, R-NE, and Re. Anna Eshoo, D-CA, passed 393-to-0 and gave the U.S. State Department a firm deadline to act.

The resolution called upon the Secretary of State to declare the genocide formally according to a U.N. Convention of 1948 which defines genocide as “acts committed with the intent to destroy, in whole or in part, a national, ethnic, racial or religious group, as such.”

The Obama administration’s findings, however, will avoid obligating the United States to take additional action against ISIS militants and does not prejudge any prosecution against its members, said the officials, who spoke on condition of anonymity because they were not authorized to publicly preview Kerry’s decision.

They’d been planning this non-action for months. According to Politico, “Administration officials have long warned that a declaration of genocide does not mean that the U.S. will step up its military involvement” in the region.

Although the United States is involved in military strikes against ISIS and has helped prevent some incidents of ethnic cleansing, notably of Yazidis, some advocates argue that a genocide determination should require additional U.S. action, especially considering the horrors being unleashed.

The Knights of Columbus and the nonprofit In Defense of Christians (IDC) recently published an 278 page study of the Christian Genocide on March 10th, and recently held a press conference at the National Press Club to put an exclamation point on it.

The heart-breaking report includes 53 pages of charts detailing hundreds of attacks against named Christians in Syria and Iraq during just the last three years, including mass beheadings, the torture of children and rape of young girls; a remarkable list of the names of 1130 individuals murdered, including the dates and places of execution; a list of 125 churches, monasteries and convents destroyed and desecrated. There are reports of parents who were crucified to the doors of their residences while their families stood in horror. Apart from the differences in scale, the compilation of crimes brings to mind comparison to the tortures committed by Nazi soldiers during the Holocaust.

“The report has unearthed many stories that the world has not heard,” according to a statement from In Defense of Christians. These include “the stories of women like ‘Claudia,’ who was captured and raped several times after ISIS militants spotted her tattoo of a cross. Or like ‘Khalia’ who fought ISIS militants off as they tried to rape captive girls and take a nine year old as a bride,” IDC states.

“It has become clear that this [report] still represents only the tip of the iceberg. We are being sent new stories and evidence daily. So what is known about ISIS’ genocidal atrocities will only increase,” according to IDC press release.

Douglas Burton, a former State Department official in Iraq who writes on the Middle East from Washington, D.C. and the Associated Press contributed to this article.