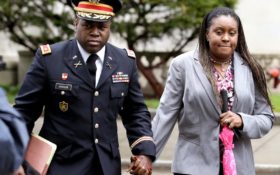 A 12-year-old girl described to a judge Wednesday how as a toddler she was repeatedly abused by her foster parents, an ex-Army couple convicted of child endangerment who were in court to be resentenced.

John and Carolyn Jackson lived at the Army’s Picatinny Arsenal facility when they were charged in 2013, and they were convicted in 2015. Prosecutors had sought sentences of 15 to 19 years, but the trial judge sentenced them to probation and two years, respectively.

Those sentences were thrown out last year by an appeals court that ruled U.S. District Judge Katharine Hayden didn’t correctly apply sentencing guidelines and imposed sentences that didn’t reflect the seriousness of the crimes.

Standing before Hayden and reading a prepared statement Wednesday, the girl said while she doesn’t remember everything from that period, she remembers “being hit and punished constantly.” She also said she still bears psychological scars from the abuse.

Her adoptive mother also spoke and told Hayden the girl spends about seven hours per week in various types of therapy, suffers from anxiety and post-traumatic stress and is prone to violent episodes.

“The Jacksons destroyed her chance for a normal life and crushed her spirit,” said the woman whom the Associated Press is not identifying to protect the identity of the girl.

At trial, prosecutors presented evidence that the Jacksons regularly beat their three young foster children and denied them food, water and medical care. Their biological son testified the couple forced the children to eat hot pepper flakes and drink hot sauce as punishment.

The children suffered broken bones and were severely underweight and had other health problems when they were removed from the home in 2010. One of the foster children died, but the Jacksons weren’t charged with causing his death.

In an unusual ruling last year, the 3rd U.S. Circuit Court of Appeals threw out the sentences for being “substantively unreasonable.”

In a pre-sentencing memo filed last week, John Jackson’s attorney wrote that his client had gone from making $120,000 a year to stocking shelves at a dollar store, mowing lawns and working at a call center since his conviction.

Since the Jacksons lived at the Army facility about 35 miles (56 km) northwest of Newark, they were tried in federal court. Because child endangerment is not a federal crime, state endangerment charges were merged into the federal indictment to go along with a conspiracy count and two assault counts.

Though the Jacksons were acquitted of the assault counts, prosecutors argued Hayden should sentence them under federal assault guidelines because the nature of the endangerment counts made them “sufficiently analogous” to assault.

Lawyers for the couple argued Hayden was correct the first time because prosecutors did not connect specific acts by the Jacksons to injuries the children suffered, and because of the “poor fit between the guidelines and the circumstances of this case.”