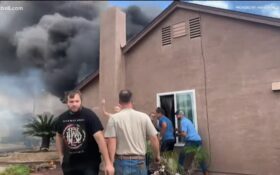 On Monday a small plane crashed in Santee, California — a suburb of San Diego.

The crash occurred in a residential neighborhood, a few blocks from the local high school. The school issued a brief lockdown via a campus advisory, which has since ended.

KUSI News — a local, independent station — interviewed officials from both the county government and the Federal Aviation Administration. These agencies confirmed that the plane was on its way to the San Diego airport, only about 20 miles away from the crash site.

In fact, city authorities reported to KUSI that parts of the plane — including an engine — landed in nearby homes.

The Red Cross built a camp nearby for residents forced from their homes due to the crash. Some residents stayed overnight amid power outages and property damage.

The pilot has been identified as a cardiologist named Dr. Sugata Das. One of Das’s co-workers confirmed Das’s identity for CBS San Diego.

KUSI has obtained the final audio transmission between the pilot of the crashed plane and the Socal tower moments before it went down. pic.twitter.com/cYRbkFeip0