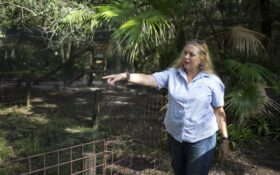 The family of a Florida man who disappeared in 1997 and who appeared on the hit TV series “Tiger King,” has hired a lawyer and is offering $100,000 in exchange for information to help solve the case.

Attorney John Phillips held a news conference in Tampa Monday and announced an independent investigation into Don Lewis’ disappearance. He also said that on behalf of the Lewis family, he’s filed a lawsuit against Lewis’ second wife Carole Baskin in an attempt to depose her and get her to speak on the record. He and the family have also paid for Tampa-area billboards asking for information in the case.

Lewis vanished a day before a scheduled trip to Costa Rica and was never found. He was declared legally dead in 2002. He and Baskin started the animal sanctuary, which later became Big Cat Rescue Corp. in Tampa, Florida.

Three of Lewis’ daughters were at the news conference. Lewis’ youngest daughter Gale Rathbone, expressed gratitude for those interested in the case.

“Amazingly, our little family tragedy has become your tragedy. Our search for closure and truth has become your mission also,” she said. “We all know by now that (Lewis) was not a perfect man. But do only the perfect among us deserve justice?”

In an email sent to the Associated Press Monday, Baskin said she wouldn’t comment. “It’s been my policy not to discuss pending litigation until it’s been resolved,” she wrote. “I had told some news outlets that I thought the press conference on Aug. 10 was just a publicity stunt, but at that time was not aware there would be pending litigation.”

Lewis’ case, and Baskin, were featured in Tiger King. Baskin is still the owner of Big Cat Rescue, and lobbies for abolishing private wildlife ownership.

Earlier this year, Maldonado-Passage was sentenced to 22 years in prison for his role in a murder-for-hire plot. He was convicted of trying to hire someone to kill Baskin, who had tried to shut him down, accusing the Oklahoma zoo of abusing animals and selling big cat cubs.

In retaliation, Maldonado-Passage raised questions about Baskin’s former husband, Jack “Don” Lewis. The documentary extensively covered Maldonado-Passage’s repeated accusations that Baskin killed her husband and possibly fed him to her tigers. Baskin hasn’t been charged with any crime and has repeatedly released statements refuting the accusations made in the series.

Maldonaldo-Passage is currently in prison. A federal judge in June granted control of the Oklahoma zoo that was previously run by Maldonado-Passage — also known as Joe Exotic — to Big Cat Rescue Corp.

Baskin previously sued Maldonado-Passage for trademark and copyright infringements and won a $1 million civil judgment against him.

The judge found that ownership of the zoo was fraudulently transferred to Maldonado-Passage’s mother in an attempt to avoid paying the judgment.

In March, the Hillsborough County sheriff asked for tips in the case of Lewis and announced a reopening of Lewis’ case.