100-150 left behind Americans, others to leave Afghanistan - The Horn News 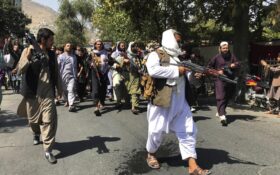 Afghanistan’s Taliban authorities will allow between 100 and 150 Westerners, including many Americans left behind by President Joe Biden, to fly out from Kabul in the coming hours, Qatari officials said Thursday. It is the airport’s first such flight since U.S. forces chaotic withdraw from the country.

The large group of foreigners would depart Thursday on a Qatar Airways flight that had earlier ferried humanitarian aid to the country, said Mutlaq bin Majed al-Qahtani, a Qatari special envoy.

Al-Qahtani said it was the first international commercial flight from Kabul airport since American forces left at the end of August, their departure accompanied by a frantic airlift of tens of thousands of foreign citizens and Afghans fleeing the Taliban.

HERE’S WHAT ELSE IS HAPPENING:

In a statement, the military said regional security and developments in Afghanistan were discussed during the meeting Thursday. It didn’t elaborate.

“Pakistan remains committed to cooperate with its international partners for peace in the region and ensuring a stable and prosperous future for the Afghan people,” the statement said.

Burns thanked Pakistan for its role in the evacuation operations from Afghanistan and pledged further improvements in diplomatic cooperation with Pakistan.

Pakistan says Qatar’s foreign minister will arrive in Pakistan’s capital of Islamabad to discuss the latest situation in Afghanistan.

The development comes two days after the Taliban announced an interim government for Afghanistan. The Taliban maintain a political office in Doha.

The interior ministry of the new Taliban government is seeking to end protests in Afghanistan after days of demonstrations that have brought heavy-handed assaults on protesters.

The minister has issued an order to end all protests in the country — unless demonstrators get prior permission, including approval of slogans and banners.

It’s unlikely the women who have been leading near daily protest demanding their rights from the country’s hardline Islamic rulers will be allowed to protest under the new rules. In the words of the ministry’s statement: “It is announced to all citizens not to attempt at the present time to hold any demonstrations under any name whatsoever.”

Former Afghan President Ashraf Ghani has taken to Twitter to say his flight from Kabul on Aug. 15 was done to save Afghanistan’s capital from bloodshed. He says his security personnel advised the secret departure, which opened the gates of the city to a Taliban takeover.

Ghani also denies widespread allegations of corruption as well as charges that he left the country with millions of dollars. He says there should be an independent investigation.

Ghani’s sudden departure has been widely criticized both in Afghanistan and abroad. Biden blamed Ghani’s flight and the government’s collapse for a Taliban takeover ahead of a negotiated deal.

Prominent Afghan political figures who stayed behind say they had expected to meet with Taliban political leaders the following day to continue negotiations.