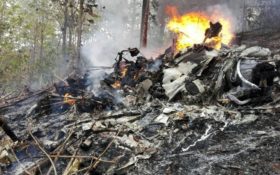 The families from the New York City suburb of Scarsdale and from Belleair, Florida, accounted for nine of the dead and were part of a tour organized by Berkeley, California-based Backroads. Their American guide was the 10th U.S. victim.

Michael Soto, deputy director of Costa Rica’s Judicial Investigation agency, said strong winds were reported Sunday in the area of the crash and were being looked at as a possible factor in the crash of the Nature Air flight in Guanacaste.

“No possibility can be left out for certain,” Soto said. “We have two aspects: The principle one would be some weather condition and if there was a mechanical issue.”

A family in the suburbs of New York City said five of the dead were relatives on vacation. They identified them as Bruce and Irene Steinberg and their sons Matthew, William and Zachary, all of Scarsdale.

Rabbi Jonathan Blake of the Westchester Reform Temple in Scarsdale said in a statement posted on the temple’s Facebook page and emailed to The Associated Press that the Steinbergs were involved in philanthropy and local Jewish groups. “This tragedy hits our community very hard,” Blake wrote.

In St. Petersburg, Florida, Rabbi Jacob Luski of Congregation B’nai Israel said victims’ relatives had informed him that four members of his congregation were also on the plane.

“It is a tragedy that the Drs. Mitchell Weiss and Leslie Weiss and their two children, Hannah and Ari, died in that terrible crash,” he said. “They were a wonderful family who will be missed.”

The Morton Plant Hospital in Clearwater, where both the Weiss parents practiced mourned their loss in a statement Monday.

“We were deeply grieved this morning to learn of the deaths of two beloved members of our team – Drs. Mitchell and Leslie Weiss,” Kris Hoce, president of Morton Plant Hospital, said in the statement. “Their lives and medical skills have touched so many in and around our community, and we are forever grateful to them. Our sympathies go out to their extended family and many friends who are also trying to process this tragic news.”

The hospital said Mitchell Weiss was a vascular and interventional radiologist and Leslie Weiss was a pediatrician.

Their 19-year-old daughter was earning a joint degree at Columbia University and List College, the undergraduate school of the Jewish Theological Seminary of America. List College Dean Shuly Rubin Schwartz told the Daily News of New York that Weiss had emerged as a student leader and ardent environmental activist.

“She was driving by a real sense of social justice,” Schwartz said.

In a statement, Backroads spokeswoman Liz Einbinder said their employee on the flight was Amanda Geissler, a native of Thorp, Wisconsin.

“Our thoughts and prayers are with the families impacted by this tragedy,” the company’s statement said.

“She was home for like 18 hours, and her and her sister came to the tournament,” Noll recalled Monday. “They knew I was playing and came to watch Stout and see me.”

“Amanda was a sweetheart, a great player,” Noll said.

At a news conference Sunday, Enio Cubillo, director of Costa Rica Civil Aviation, said the Nature Air charter crashed shortly after taking off from Punta Islita on a planned flight to the capital of San Jose.

Cubillo identified the pilot as Juan Manuel Retana and described him as very experienced. Former Costa Rican President Laura Chinchilla said via Twitter that Retana was her cousin. The co-pilot was identified as Emma Ramos.

Cubillo said the plane flew from San Jose without passengers on Sunday morning, but was unable to land at Punta Islita because of high winds and diverted to Tambor. When the winds decreased, it landed at Punta Islita without problems, he said.

It took off from Punta Islita with the crew and 10 passengers at 12:10 p.m. and crashed about 10 minutes later. Winds of 20 knots or 23 mph were reported at the time, Cubillo said.

Nature Air did not respond to phone and email messages.