What!? 10 sharks, alive and dead, found hidden in NY basement - The Horn News 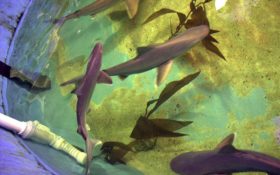 Seven live sharks and three dead ones have been seized from a pool in the basement of a home in New York’s Hudson Valley.

Marine wildlife experts took blood samples and measured and tagged the sharks before transferring them to the Long Island Aquarium in a truck equipped with water tanks, oxygen and climate control.

No one has been charged. An investigation is continuing.