10 reasons 2018 is the most CRITICAL election in U.S. history - The Horn News 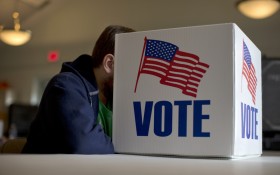 There’s not much the liberal Hollywood elites have in common with mainstream middle America… but there’s one thing both sides agree on right now.

Next month’s midterm election could be the most critical vote in American history!

The left, out of ideas, is of course resorting to its tired strategy of trotting out has-been celebs like Tom Arnold and Michael Moore along with the usual array of potty-mouthed comics and late-night hosts.

This time around, they even managed to get Taylor Swift in their corner!

But the right has something else going for it: IDEAS!

Ben Shapiro, radio host and editor of The Daily Wire, told Fox News that it’s vital for conservatives to defend those ideas at the ballot box in November to block a Democrat opposition that’s “more radical than ever.”

“They’ve embraced a nastier vision of politics than ever,” he said. “But that does not mean they are fated to lose.”

They’re counting on rallying the left to turn out in November to vote for Democrats who can BLOCK the Trump agenda and bring the nation’s government to a halt.

Shapiro is countering with a rallying cry of his own with his list of 10 key issues on the line in November for conservatives, even if the president himself isn’t on the ballot:

He’s absolutely right on these issues.

Even with Republicans holding majorities in both the Senate and the House, Democrats have been trying to block the movement to appoint conservative jurists to the courts.

If they win, vital judgeships could be put on hold indefinitely.

They can also stymie the Trump administration with endless investigations and subpoenas and many are openly threatening to impeach the president.

The could drive our economy into the ground at home and lead to foreign policy disaster overseas.

And of course, the left loves their culture wars, forcing a radical agenda on Americans that violate religious freedom with the help of their pals online and in the media.

It’s not the rule of law at that point.

It’s practically a mob… or sometimes a literal mob, as we’ve seen with leftist street violence.

That’s what’s on the line.

“Your vote matters. Your vote counts,” Shapiro urged. “Get out there on Election Day and ensure that the Democratic Party of Nancy Pelosi and Chuck Schumer and Hillary Clinton aren’t allowed anywhere near the levers of power.”

There’s a reason both liberals and conservatives are so desperate to rally their voters: Midterms, more than any other election, are all about turnout.

Generally, only about 60 percent of the voters show up in presidential years.

For midterms, that percentage drops by a third, with only 40 percent of voters casting a ballot.

That’s an advantage for Republicans, who tend to be older (the wisdom of age!) and show up for every election. Nearly half of those 45-64 turn out for midterms, along with more than 60 percent of seniors.

Young people – who prefer liberal candidates – have a miserable track record overall, especially during midterms, when more than 3 out of 4 stay home.

To help motivate them, the left has cooked up a video of foul-mouthed seniors TAUNTING millennials – urging them to stay home while they go out and vote:

Yeah, we know it's #NationalVoterRegistrationDay but we found some folks who think maybe you shouldn't vote: pic.twitter.com/qhkIjr8Ooi

Just 35 percent said in a Public Religion Research Institute poll last month that they’re definitely voting this year, and the real number will likely be much lower.

If history is any indication, most of those young adults will be sitting home on Election Day, surfing the Internet, posting on Instagram and playing videogames.

Not their home, of course. Many of them still live with their parents!