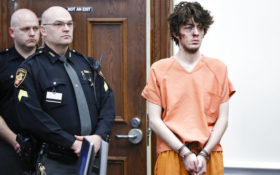 A judge has set a $10 million bond for a man accused of fatally shooting a sheriff’s deputy and wounding another deputy during a 12-hour standoff in Ohio.

Authorities say Detective Bill Brewer died from his wounds. The other deputy was treated and released.

Prosecutors said Monday that Winn had faked killing himself and the two deputies were shot when they tried to enter the apartment to assist him. Prosecutors say they will seek the death penalty.