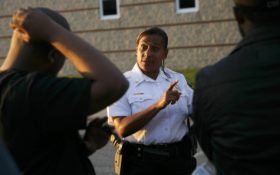 Protesters angered by the federal detainment of migrants at the U.S.-Mexico border blocked access to the Immigration and Customs Enforcement headquarters in Washington, D.C., and staged a sit-in.

News outlets reports at least 10 sit-in demonstrators were arrested and charged with unlawful entry. Dozens marched from the National Mall to the agency’s site around lunch time Tuesday, stopping federal workers from returning to their desks.

The demonstration went on for hours as attendees sang and carried signs saying “Never again is now” and “Never again means close the concentration camps.”

The protest was one in a string of similar demonstrations outside ICE facilities nationwide during which protesters called for the dissolution of ICE and an end to crowded detainment centers at the U.S.-Mexico border.